Over the last two days we’ve focused on finishing the grab samples and drop camera transects.  On Wednesday, faced with winds from the north and a northerly swell, we were limited to running multibeam lines across the Turbot Bank area for the first part of the day. Due to the size of the site and the fact that we could only run lines in one direction, it took the first seven hours of the day to complete just three! The screengrab below shows some of the raw multibeam bathymetry data. The data show a depth range across the survey area of 80 metres (in the north) to roughly 60 metres (in the central area). 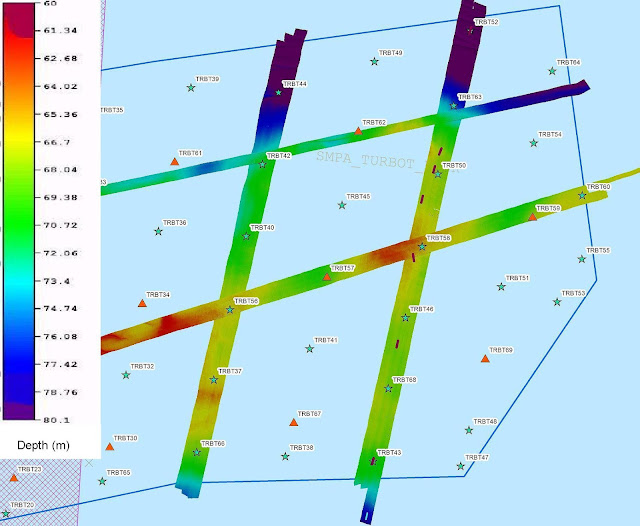 Screen grab of multibeam data. Note: To increase data coverage, further survey lines will be completed in due course.

Throughout the rest of Wednesday and some of Thursday, the day and night shifts shared the effort of grab sampling and sieving.  There was a collective sigh of relief when the final grabs were processed. We were able to use the remaining contingency time to complete some extra drop video tows. In order to facilitate the interpretation of the multibeam backscatter data, the video tow stations were positioned to intersect with the multibeam survey lines. The backscatter data show the sound energy reflected back from the seabed and this can be linked to the physical properties that make up the sediment (see image below; energy values are shown using a grey scale). On the screen grab below, the darker areas indicate higher reflectance.  The video tows confirmed our predictions that the darker regions were indicative of gravel dominated substrates while the lighter areas were indicative of sandier substrates. 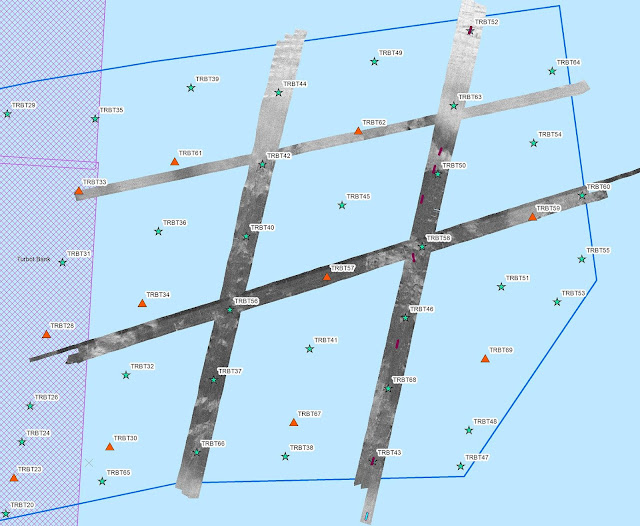 With our survey time at Turbot Bank coming to an end, we’re getting ready for our final transit home in the early hours of tomorrow morning. 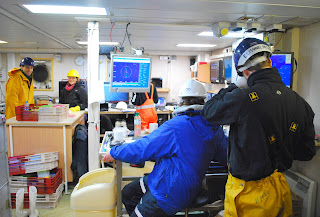 A shot of the day shift team in the plot lab…
Posted by Alice Ramsay at 21:46