Rockin’ and a rollin’

Excellent sea conditions have enabled camera work to continue around the clock. At the Wyville Thomson Ridge we have been busy surveying the stony reef communities at various depth zones right across the south-western part of the site. Adding to the 10 video tows from yesterday, we have now completed a further 19 giving a total of 29 tows.

The type of beasties we’ve seen at the Wyville Thomson Ridge are considered largely typical of stony reef communities at these depths, and have included the bizarrely shaped pencil urchin, more squat lobsters than you could shake a stick at, and masses of vivid coloured encrusting sponges. We’ve also had a few fishy visitors, including chimeras, ling and a red banded fish chilling out on the rocks. 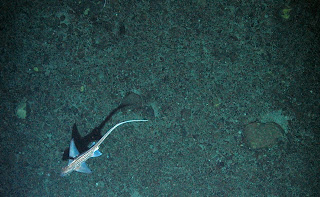 A few particularly special video tows came at the end of the day shift today when we visited some locations within the Wyville Thomson Ridge SAC surveyed by other scientists several years ago. We wanted to do some repeat work here to see if similar communities were still present. We certainly weren’t disappointed, with beds of cup corals, sponges, countless featherstars and the delicate framework building cold water coral reef Lophelia pertusa all present in force. 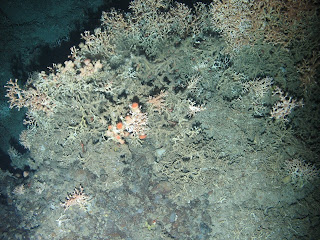 Having ended our time at the Wyville Thomson Ridge on a high, it was now time for a short steam to hopefully have similar luck at our second and final study area – the Faroe-Shetland Channel.
Posted by Hannah Carr at 11:51