One site down, two to go!

The night shift took over from the day shift to continue grabbing the remaining stations at the Braemar Pockmarks cSAC site. The completion of the grab sampling signified the end of our work at the Braemar Pockmarks site. Content with the data we had collected despite the weather being thrown at us, we were looking forward to moving down to our next study site Scanner Pockmark cSAC located in an area known as the Witch Ground Basin.

Unfortunately we were due another blast of bad weather which we heard was affecting mainland UK over the last 24 hours. With this in mind, once we arrived we set to with gathering acoustic data for the site to see how far we could get! Our first tow line picked up the two pockmarks in the north of the site known as the Scotia pockmarks complex, followed by another tow which picked up the larger pockmarks within the site. The multibeam data extract below shows the depth profile of the largest of the pockmarks within the Scanner Pockmark cSAC boundary, which previous surveys had identified as containing submarine structures made by leaking gas. 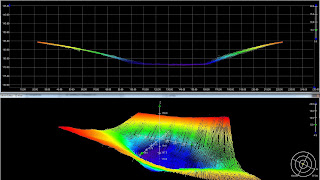 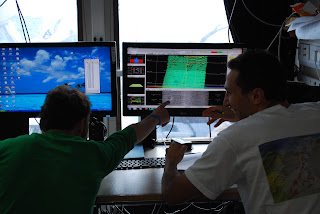 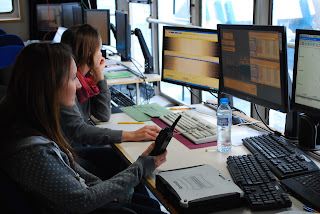 Working away in the plot room, processing side-scan sonar and miltibeam data.

The wind picked up mid-afternoon creating white peaks and spray; an extremely large swell developed, sometimes reaching 8-10m.  A grim prospect for the plot room as sunset approached. After a further two multibeam and side-scan sonar lines, a halt was called as data quality deteriorated.  This weather was worse than before, with chairs sliding across the room as you sat on them and the ever-changing feeling of weightlessness and then being pinned to the floor.  Walking around the vessel was tricky, and resembled Monty Pythons Ministry of Silly Walks.  Most of us hunkered down and waited for it to pass.
Posted by Hannah Carr at 12:50