Sieved to see another day…

When the night shift took over at midnight, the weather was still a little too rough for anything other than multibeam and so we continued to run some acoustic lines from East to West. The Turbot Bank survey site is large in comparison to the cSAC sites (nearly 30 times bigger than the Braemar and Scanner cSAC sites combined). Good quality data could only be gathered when the vessel travelled in one direction, with each line taking nearly two  hours. Just before sunrise we deployed the drop camera and found a number of interesting species. Some of the highlights have included squat lobsters, sandeels, sea urchins, occasionally some scallops and plenty of brittlestars and starfish.  It was evident when watching the footage of the seabed that this was a high energy site, with significant currents sweeping across the seafloor. 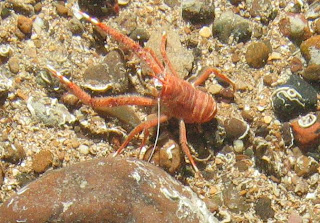 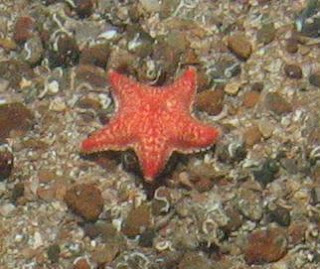 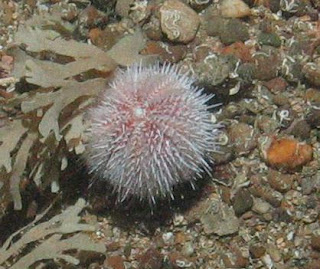 A key sampling method at the Turbot Bank site will be using the Hamon grab to take samples of the seabed. We plan to deploy the grab at over 70 stations spaced evenly across the survey site. Particle Size Analysis (PSA) and macrofauna analysis will be undertaken on these samples in order to better characterise the substrate and the organisms that it supports. Sampling the sands and gravels at Turbot Bank presents some challenges compared with the soft muds at the Braemar and Scanner Pockmark sites. Occasionally grab samples have to be discarded if insufficient volume of sample material is collected and this is most likely to occur if the grab strikes cobbles or boulders. It will take some time to complete the sampling and so it’ll be important to prioritise the good weather windows for using the Hamon grab.

The first few grabs of the day brought up coarse sandy sediment, with some cobbles. This sediment had fewer worms than seemed to be present in the mud that we sieved at the cSAC survey sites, instead containing sand eels, burrowing urchins and brittlestars that live in the sediment. As the sediment was coarse it collected more readily in the 1mm sieves, extending the sieving time per sample. By lunch time a number of grabs had been taken but there was plenty left to go! 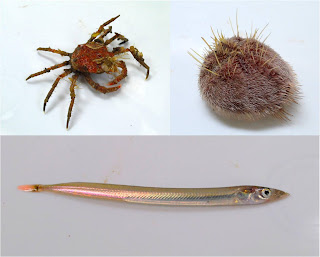 Some images of the species we found in the grab samples. Top left: spider crab, disguised with marine life growing on its shell. Top right: Purple heart urchin (Spatangus purpureus). Bottom: Sandeel, a key food source for seabirds in the North Sea.