Sidescanning within the SAC is finished

We’ve been really lucky with the weather so far, considering the forecast at the beginning of the week. Bad weather is all around us (Force 11 in the Faroes not that far North of us) but we are still in (relatively) calm water in the eye of the storm.

Having finished the sidescan sonar lines on Wednesday 31st October at 10:30pm, we spent the night checking sea conditions as it had become too rough for camera work. By morning the wind and swell had calmed enough for us to start the first of the camera tows, lowering the video and stills cameras on their frame to the seabed, between 400m and 800m below us.  The aim is to hover the camera frame at about 1.5m off the seabed whilst the boat drifts slowly along. 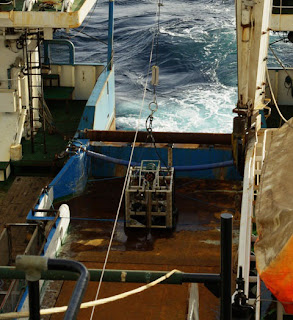 Once the ship’s crew have got the camera to the seabed, in our office below decks, three or four people watch the video monitor.  One person makes fine adjustments to the height of the frame off the seabed with the winch as the boat drifts along – but in the 3-4m swells we have been experiencing, this is just about impossible. One person presses a button on the laptop to take still photos approximately every 20 seconds.  However, as there is a slight delay between pressing the button and the camera at the seabed responding, you need to press the button a couple of seconds before the camera is at the right height, and before it hits the bottom as a result of the boat rocking in the swell – not as easy as it sounds! The third person writes on a form what they see on the video, and the fourth records the position of the start and end of the tow and each still photo.  Each video tow is 500m long, which takes about half an hour.  The scientific staff  work in shifts of 12 hours on, 12 hours off during video work, so the work continues 24 hours a day. 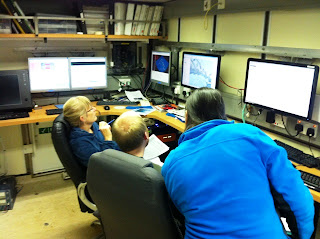 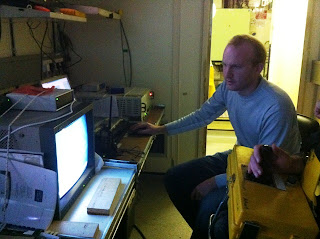