The day started with the night shift taking over the seabed imagery work, continuing to carry out camera transects of the seafloor over features spotted on the acoustic data. We saw a range of wildlife typical of sandy mud habitats, including seapens, numerous flatfish and plenty of burrows, some of which were created by the prawn Nephrops (also known as Dublin Bay Prawn or Scampi).  We also saw what looked like carbonate structures and shell hash within some of the pockmarks.

The pockmarks are crater like depressions on the seabed which are thought to have been produced by either gas or fluid seeping up through the seabed. The shell hash is often found associated with the carbonate structures within the pockmarks.

This work took us up until breakfast, after which we carried out some final bits of multibeam and sidescan sonar to make sure we filled all the remaining gaps in the acoustic data. 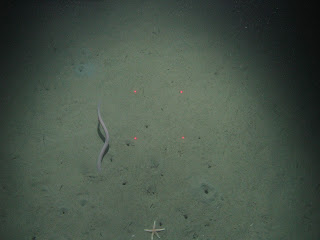 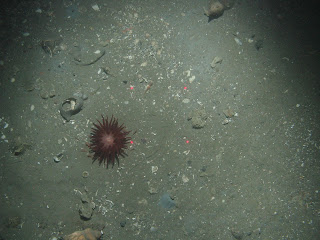 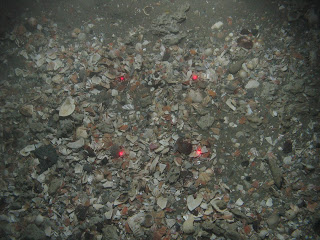 Shell hash within a pockmark﻿


The remainder of the day was consumed with carrying out grab samples at planned stations. This work comprised of using two different types of grab; the hamon grab which is used to take samples from coarser sediments (such as the shell hash in the bottom of the pockmarks) and the day grab which is used for softer sediments. Once a grab has been deployed from the ship it is winched down to the seabed where the mechanism is activated to scoop up some of the seabed. The hamon grab has a nifty device called a HamCamTM which is a camera attached to the grab allowing you to see what you are about to sample.  The grab is then winched back onboard where it is then processed. This is done through a number of stages using a sieving system. The hamon grab samples were photographed and a sediment sample taken for particle size analysis (PSA) and finally the remaining sediment is then processed ready for macrofaunal analysis using a sieve with mesh size 1mm. Subsamples of the sediment collected in the day grab were taken for PSA, and meiofauna (very small animals), before it was processed for macrofaunal analysis using a sieve with mesh size of 1mm. This work is done out on deck and involves getting quite wet and muddy! 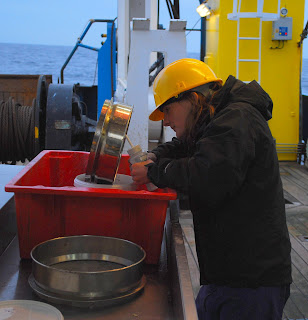 Collecting macrofauna off a sediment sieve﻿ 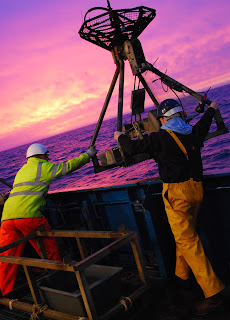 As the day drew to a close, we were greeted by an amazing sunset. 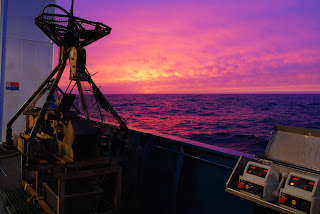