Batten down the hatches!

After the night shift took over we completed the last priority line of multibeam and sidescan sonar, followed by another six lines of multibeam to fill the remaining gaps in the data we had collected so far within the Braemar Pockmarks cSAC. After warnings of gale force winds we attempted to get as much completed as possible before the weather deteriorated.   Unfortunately by around 9am, the weather had really taken a turn for the worse, and data quality was suffering, so we had to call it a day.

As predicted the weather stayed poor for the rest of the day with wind speeds averaging 42 knots and gusts above 50 knots.  The swell was in excess of 5 metres! Needless to say the waves in the images below were a common sight for those on the day shift and no further progress was made in terms of data gathering. 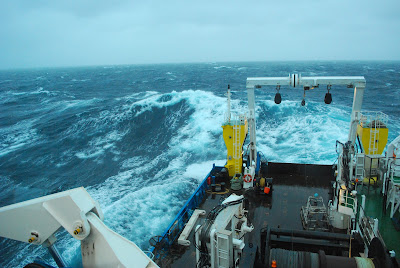 Swell off the aft deck 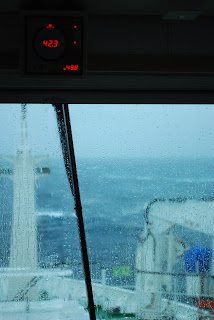 After reviewing the options, we decided to stay on site and wait for the storm to blow through. This was decided on rather than do a 30 hour round trip to take the ship into sheltered inshore waters to carry out work on some of our contingency survey sites, which could potentially result in us missing a good weather window back at Braemar Pockmarks.  We’re keeping our fingers crossed that the conditions will calm down and we’ll be able to start work again soon.
Posted by Hannah Carr at 10:44