Further exploration of the pockmarks begins

Day four of the survey begun with little change in the weather, the wind still howling outside and the swell huge, and so we continued to wait for it to ease up. Eventually at 7:30am it appeared to have settled enough to get going again with the acoustic work. We completed the final two mutibeam lines which had been planned, followed by two additional multibeam and sidescan sonar lines which crossed the other multibeam and sidescan lines at 90 degrees. This is good practice in terms of quality control for the acoustic data.  Whilst using the sidescan sonar, gas bubbles (likely to be methane) could be seen escaping from the seafloor at some of the pockmarks.

Using the initial outputs from the acoustic data, we planned a suite of video tows and grab stations. We prioritised these video tows just in case the inclement weather returned, so that these could be carried out at the locations of the pockmarks and more importantly where there have been previous data gathered for the submarine structures made by leaking gases.

In the afternoon we started off with camera work, consisting of a series of video camera tows with still images being taken at regular intervals. The images below show a snapshot of the wildlife that we saw at these survey locations.  We found evidence of carbonate structures on the seabed in some of the pockmarks, as well as a range of animals living on the seabed, including seapens, hermit crabs, angler fish and wolf fish.  On one of the tows, a large shoal of saithe appeared, making seeing the seabed quite challenging. 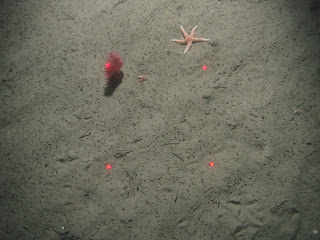 Muddy sediment with the Phosphorescent seapen (Pennatula phosphorea) and starfish 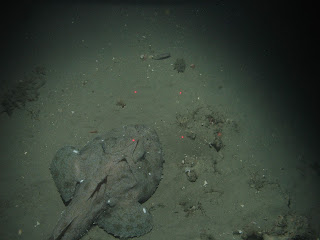 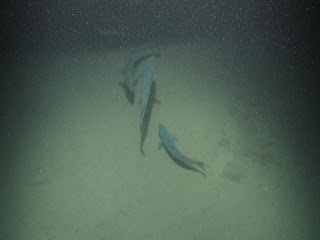 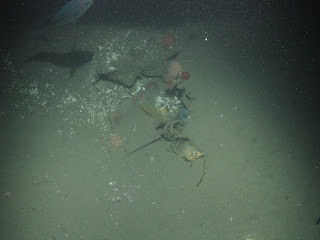 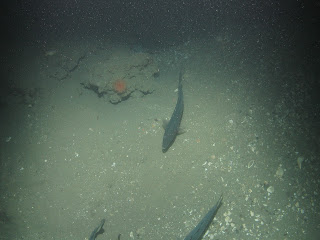 Carbonate structures on the seabed
Posted by Hannah Carr at 14:13