Going cyclonic on the transit to Turbot Bank

The day commenced with continuation of video tows, a mixture of lines crossing those already carried out within the four main pockmarks and some additional video tows over some smaller pockmarks within the south of the Scanner Pockmark cSAC.  The multibeam bathymetry/ backscatter showed that these smaller pockmarks had some interesting ‘scour pit’ features trailing off their south end. After the last tow was completed we changed gear type to the Day grab to take some final sediment samples from within the four main pockmark features in the site. By the end of the third grab station the swell and wind had really picked up and it was no longer safe to deploy the Day grab from the ship. 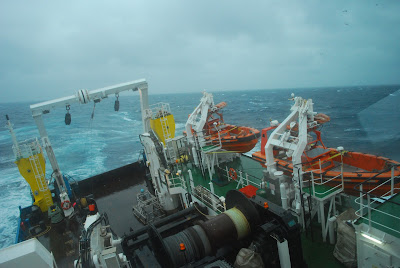 A glimpse of the gale force weather
﻿
Soon after this, having collected sufficient acoustic and groundtruthing data for the Scanner pockmark cSAC, we began to transit to our third and final site Turbot Bank. As explained in yesterday's post, the decision was made to survey the site of a potential Nature Conservation MPA called Turbot Bank instead of one further north in the Fladen Grounds. This journey was especially eventful, with by far the largest swell we have experienced and with the weather on the beam, the ship was lurching all over the place with people and belongings sliding everywhere. At one point whilst sat in the lounge, people were sliding across the room whilst sat in their chairs!

At 2pm the ships general alarm sounded for our weekly emergency muster drill. We all donned our PPE (Personal Protective Equipment) - steel toe-capped boots, wet weather gear and hard hats, to brave the inclement weather to muster up on deck for a safety briefing. 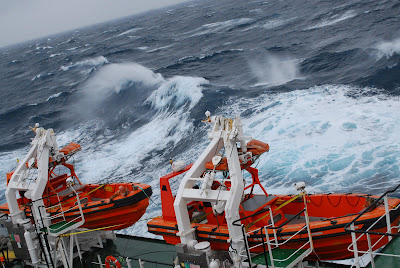 Can you spot the stowaway?﻿

We arrived at Turbot Bank just after dinner, and started running multibeam lines across the bank.  There is existing MCA Civil Hydrography Programme data for the western part of survey area, so we were careful to avoid duplication.  The weather was still too rough to deploy the Hamon grab or camera gear.  The forecast is looking slightly better over the next few days ....no gale warnings at least.
Posted by Hannah Carr at 14:45