Now we have returned from the stormy seas of northern Scotland and got our land-legs back, we have been able to look back over the work we achieved. During our 15 day survey of the Wyville Thomson Ridge and Faroe-Shetland channel we were able to employ a wide variety of data collection techniques and cover a large area within the two survey areas.

Some summary statistics of what was accomplished during our time is shown below: 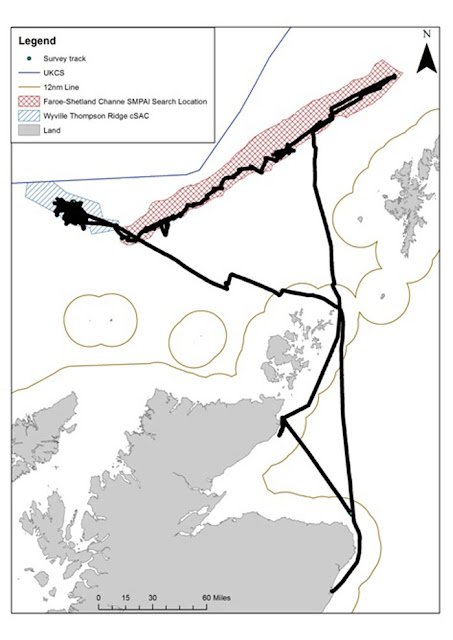 We would like to thank the captain and crew of the MRV Scotia, our partners from Marine Scotland Science, Rebecca and Gillian for their help and assistance during this survey.

As this cruise has come to an end another is just about to begin with colleagues from JNCC due to depart onboard CEFAS Endeavour on 17th November heading to the Braemar Pockmarks and Scanner Pockmark SCIs, which contain the Annex I feature ‘Submarine structures made by leaking gas’ as well as the Scottish offshore Nature Conservation MPA proposals within the Fladen Grounds.
Posted by Hannah Carr at 12:18