The day commenced much the same as the last, with strong winds and large swell inhibiting us from carrying out any further work on our new study site. This weather was worse than we had suffered earlier in the week and the ship was pitching high over the large rolling waves. Even though there was still significant swell, at around breakfast time we made the decision to recommence with multibeam tows across the site to see what the quality of data would look like. It turned out that lines could only be run in one direction with the weather, to get acoustic data of an acceptable quality. This meant that gathering this data would take double the time and we were aiming to get 100% coverage of the site by the afternoon. By late morning we had some blue sky and even some sunshine breaking through the grey cloud which did well to lift the spirits! 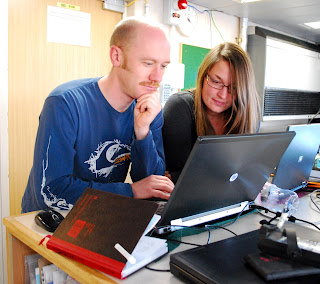 Unfortunately, this lift in the gloomy weather didn’t last long and the swell increased just enough to prohibit the use the mulitbeam. The weather was still too rough to use to Hamon grab or camera equipment and so we planned a series of Day grabs. The Day grab is smaller and lighter than the Hamon grab and is therefore safer to deploy over the side of the vessel, in poor weather. We designed a sampling grid which provided good coverage across the Scanner Pockmark cSAC and extended into the area outside (an area which is part of a proposed area for a national Nature Conservation MPA (under the Scottish MPA project). We made good progress over the remainder of the day. Samples taken were composed primarily of mud and one sample contained the seapen Virgularia mirabilis. 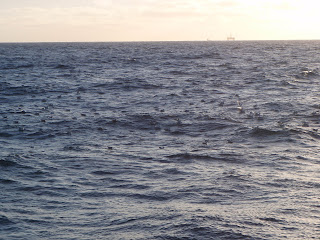 We’ve adopted a large amount of seabirds that spend the day circling around the ship and sitting on the water beside us, most likely hoping we are a fishing boat with some sort of food!