A grabbing and video marathon

A week into our survey and despite the ‘weather gods’ doing their best to hinder us, we’re still not far off schedule. We had a spell of calm weather at the start of the weekend and we made good progress with the Scanner cSAC survey. The first eleven hours of the day were spent using the day grab to get samples of the mud sediment for particle size analysis (PSA) and sieving for macrofauna  A subset of meiofauna and ‘organics’ were also taken.  In today’s samples we found the burrowing urchins, brittlestars, the sea pen Pennatula phosphorea and many different types of worms! A warm cuppa offered occasional respite from the cold work out on deck. 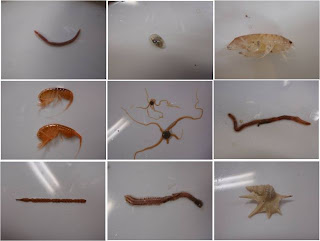 Some of the creatures brought up in the grab samples

As the swell calmed down, the next task was to deploy the camera and take video and still images within the cSAC boundary. The first video tow showed a slightly different picture to that at Braemar with mud sediment rather than sandy mud and consequently many more Nephrops (scampi) and Nephrops burrows. We also saw lots of seapens and burrowing anemones. We planned single drop down camera tows across some of the smaller pockmarks and more intensive camera transects (four tow lines) intersecting with the Scanner pockmark. 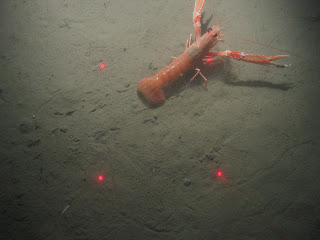 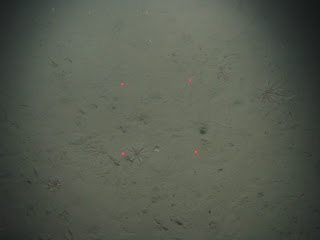 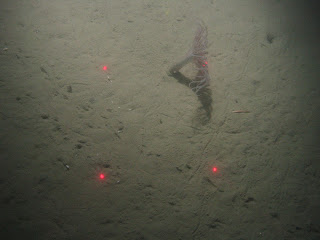 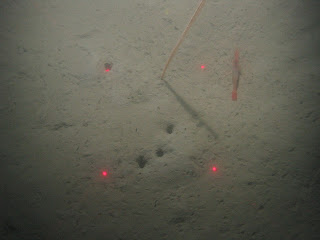 There has been a change of plan for the rest of the survey and assuming we complete the work on schedule, we’ll be leaving Scanner for Turbot Bank ( rather than the Fladen Grounds) tomorrow morning.   Similar to the Fladen Grounds, Turbot Bank is also a proposed area for a national Nature Conservation MPA but is located further south and closer inshore, 25 miles due east off Peterhead.
Posted by Hannah Carr at 14:34