It took until 11:00 on our second day at sea to reach our first study site, Braemar Pockmarks cSAC. The weather had gradually worsened since leaving Hartlepool and although there was only a little rain, both the wind and swell (approximately 2.5 meters) had picked up considerably, resulting in an uncomfortable roll on the boat. In the morning light the horizon was dotted with gas and oil rigs as we passed through towards our study site. In spite of the weather, the preparation for the acoustic work commenced and the side scan sonar equipment was made ready. We started off on our first survey line using both multibeam and sidescan sonar after using the CTD (Conductivity Temperature Depth) to calculate sound velocity throughout the water column  (~120m depth), so that appropriate corrections could be applied to the acoustic data. 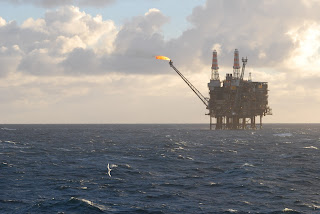 The quality of the data was suffering due to the rough weather, so the orientation of the survey lines was changed; data quality was best when travelling in a north-easterly direction and we restricted the survey lines to this direction only in order to keep the weather behind us. To further improve the quality of the data, we narrowed the footprint of the multibeam and reduced the vessel speed.

Despite the weather, we got some good data and throughout the rest of the day managed to carry out multiple survey lines. Braemar Pockmarks is a relatively small site (5.18km2), and we’re aiming to get 100% acoustic coverage of the seafloor within the cSAC and some of the surrounding area. This will allow us to better understand the bathymetry and seabed texture, and identify areas to target with both video camera and sediment grab sampling. Our main interest at this site is the condition of the Annex I feature ‘submarine structures made by leaking gases’ which the site is designated for. In addition to undertaking planned sampling stations we will also target key areas which have been indicated by the acoustic work as potential further examples of this feature.

The day passed with intermittent squalls of hail which turned the sea and sky white and some sunny spells. By the end of the second day of the survey, we had completed most of the priority multibeam and sidescan sonar survey lines with some infill of multibeam lines still left to do, before starting on the camera work. The day shift finished just as the shipping forecast reported ‘gale force winds’ with wind speeds approaching severe gale nine....
Posted by Hannah Carr at 10:05