A short transit from the Wyville Thomson Ridge saw us at our second and final study area – the Faroe-Shetland Channel which is of particular interest to Marine Protected Areas work in Scotland. The ‘Faroe-Shetland sponge belt’ MPA proposal has been identified primarily for its aggregations of vivid yellow and white deep sea sponges, known to Faroese fishermen as ‘ostebund’ or ‘cheesy bottoms’.

These dense sponge aggregations, which can reach numbers of up to 4-5 individual sponges per m2, are thought to be situated around the 400-600m depth mark and often found in association with iceberg ploughmarks which provide settlement points for the sponges. We have records of the deep sea sponge aggregations habitat towards the eastern extent of the MPA proposal, but want to see if these numbers are present towards the west of the channel.

Video tow work began in quite an exploratory fashion, with 1km long video tows planned at approximately 5km intervals between sampling stations selected randomly between 400-600m in depth. Unfortunately, just as occasional sponges were starting to appear on the video feed , the camera took a bit of a turn for the worse and needed some maintenance before it went anywhere near the water again. Fingers crossed for a quick repair! 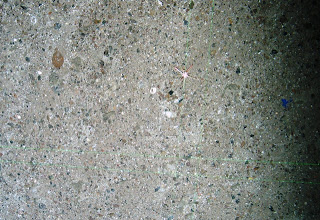 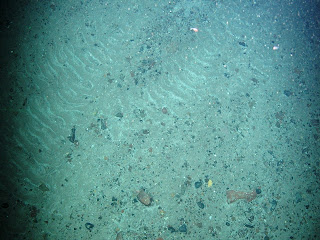 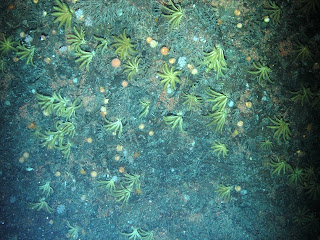 Featherstars and anemones on rock﻿

In the meantime, we’ve been using the onboard grab sampling equipment to take some samples of the seabed at previously video surveyed locations. These samples will be used for analysis of the sediment types present and the animals living within the seabed. We’ve also been setting up the sidescan sonar device for deployment to help us generate a picture of the lumps and bumps of the seabed we're videoing and taking grab samples of. This will help us to better identify the iceberg ploughmark zones previously mentioned where sponges like to settle and hopefully better target our camera work.