The search for ‘cheesy bottoms’ continues...

With our towed video camera back up and running it was time to kick into gear and continue our search for aggregations of deep sea sponges on the seabed of the Faroe-Shetland Channel. Keeping an eye out for the aptly named ‘Ostebund’ or ‘cheesy bottoms’ as they are known by Faroese fishermen due to their appearance, we continue to move eastward towards previously identified records of the habitat.

Along our journey we came across some oil industry installations, the first sign of other civilisation we’ve had all trip barring the odd trawler vessel in the distance. After some frantic waving and observing it was back to the video surveys. What beheld us was some pretty interesting animals, including a range of lamellate, lobose and encrusting sponges, a fireworks anemone or two, some vivid red sea cucumbers, pencil urchins and several species of fish. A taste of the diversity of species identified are provided below. 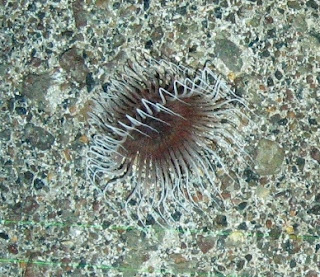 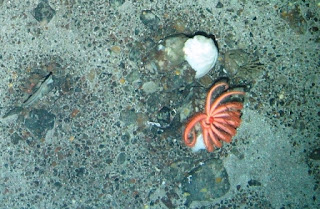 All was going well, and we were moving towards completing some repeat surveys from data on sponge grounds collected over six years ago, but unfortunately camera problems once again struck. This time the camera tow cable had become wrapped around the transponder unit that tells us the position of the camera on the seabed. So, it was back to the angle grinder to cut out the now kinked piece of cable and a 2 hour repair job at 1am in the morning. With the camera back up and running it was now time for the weather to foil our plans. We now sit waiting for a weather window to continue with our camera work.
Posted by Hannah Carr at 14:06