After the calm comes...

The night shift had another successful 12 hours today moving aross the Western Channel site collecting grab samples, video data and multibeam. The seabed in the area has been very shelly overall with some areas being quite rocky with large boulders. On this hard ground the grab sampler is unable to collect any sediment for analysis so we have relied more heavily on the data collected by a sledge mounted camera which can move over the seabed and take video and photographs as it goes. The sledge is deployed off the stern of the boat on a cable and we then watch in the lab as it sledges over the sea floor beneath us. 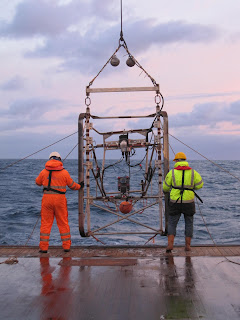 The Cefas blog shows some great pictures of different fish species that we saw during the camera tows over the last few days, including a great video of a monkfish which we took just before our shift ended today.

Despite all the excitment the video and photographs provide, the highlight of my day today was being able to watch about 20 common dolphin riding the waves at the bow of the ship. Not as spectacular as the pod of 200 that the first survey team saw, but certainly good enough for me (video to come shortly)! 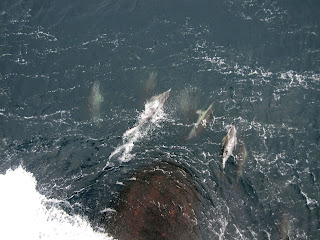 Unfortunately the weather has now picked up quite a lot and the swell is pretty big. The day shift will continue to sample the stations across the Western Channel when the weather allows and we should hopefully have the site completed within the next day or two. During the down time there is always something to keep us entertained. We may even have a song or two finished by the end of the survey! 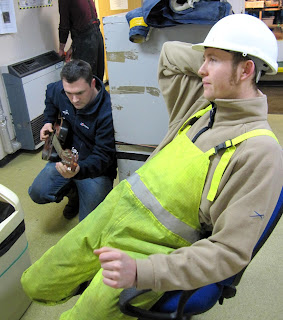