Day five of surveying at North St George’s Channel is now drawing to a close. Having collected video and still images of the seabed from over 150 stations across this area, we are now gaining a better understanding of the extent and distribution of circalittoral rock habitats within the recommended MCZ site boundary, in particular the extent of drumlins, subtidal biogenic reefs, and horse mussel beds. Over the last week, we have seen a wide range of species, including squat lobsters, edible crabs, red gurnards, small-spotted catshark, bib, crinoids, sunstars and peacock worms.

North St George’s Channel rMCZ is the largest site we will be surveying on this trip (1388km2) and is composed of a variety of habitat types. A map illustrating the diversity of macrofauna present within this site can be viewed below: 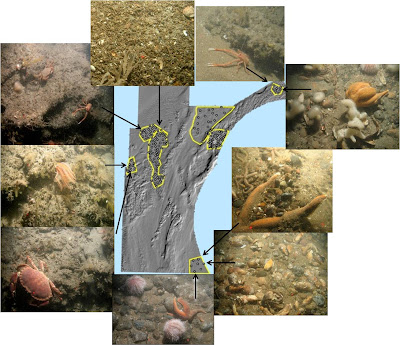 Features of particular interest indentified during this survey include:

MDAC
Methane-derived authigenic carbonate (MDAC) outcrops were observed at numerous stations across the site. MDAC concretions are formed by microbial oxidation of methane and other gases that bubble up from below the seafloor. The structure itself functions similarly to a reef, providing a surface for attachment and refugia for associated species. However, they can also support unique chemosynthetic organisms that survive on the leaking gases. Submarine structures made by leaking gases, such as MDAC, are listed as Annex 1 habitats under the Habitats Directive and there a number of offshore SACs designated to protect these habitats and associated communities. 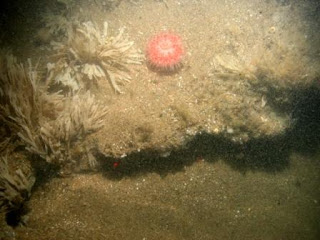 A pavement of MDAC projecting above sandy sediment providing a surface for attachment of a hydroid, Flustra foliacea, and dahlia anemone, Urticina felina

Modiolus modiolus
Horse mussel shells (Modiolus modiolus) were found scattered on the surface of the seabed at a number of stations and a live specimen was found in a Hamon grab sample. These organisms live either half-buried in sediment or attached to hard substrate and can clump together to form extensive beds or reefs.

Sabellaria spinulosa
Crusts of Sabellaria spinulosa were also found in a number of locations across the site and their presence was confirmed by use of the Hamon grab. They can occur in large numbers offshore and are able to form extensive reef structures from sand and gravel. Biogenic reefs such as these provide a home to many species such as sponges and corals as well as giving shelter to fish and crustaceans. JNCC hosted a workshop in 2007 in order to better define S. spinulosa reef and published a report to summarise what was agreed. 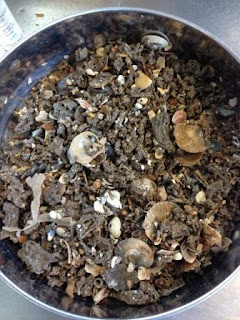 Suspected Sabellaria spinulosa tubes in a grab sample from North St George’s Channel. The sediment fraction <1mm has already been sieved out.

Drumlins
Drowned drumlins are elongated submarine hills formed within a retreating glacier. There are a few competing theories as to exactly how they are created, but they are composed of glacial till and are typically found in conjunction with other glacially-formed features such as eskers, which are long, winding, ridges formed by streams within and under glaciers.

Drumlins are listed as geomorphological features of interest in the MCZ Ecological Network Guidance. 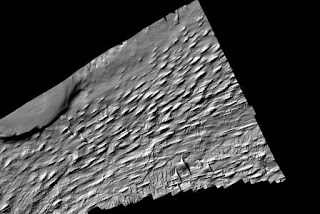 We should finish work on North St George’s Channel tomorrow evening, when we’ll start the 70km transit south to Mid St George’s Channel. This site already has nearly full-coverage multibeam data, so we know a little about the bathymetry and hardness of the seabed, but it requires camera work and sediment samples to be taken in order that we can link acoustic signatures with actual ground types.
Posted by April at 12:34