The Med or the English Channel?

Hello again from the Endeavour!

The sun is still shining and The English Channel is incredibly calm! It looks rather like the Mediterranean Sea (albeit on a cold spring day).

The crew is great, all equipment has been working fine, and everything is currently going according to plan.  Most of the crew and scientists are organised into two work shifts: the day shift (from midday to midnight) and the night shift (the 12 remaining awkward hours).

For the past three days, and nights, we have been working in the South Dorset rMCZ, gathering evidence on the extent and distribution of the habitats for which this marine protected area has been recommended. In particular, we are recording video footage and taking photographs of the seabed, as well as collecting samples of the surface sediment and macrofauna. So far, we have visited 85 of the 87 planned sampling stations, so we should be finished by midday on the 22nd April.

We deploy different sampling instruments depending on the type of seabed that we expect to find, and the information needed for that particular location.
We have three different video cameras systems on board, but for the South Dorset site we mainly used the drop camera frame. This system is designed for rocky seabeds, as there is less risk that it will snag on rocky protrusions or other obstructions. It has an underwater video camera which can also take high resolution still images and is equipped with a flash and two strobe video lights. 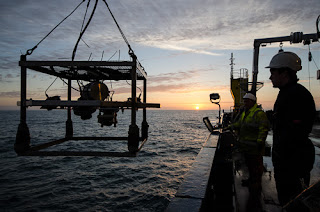 The camera is controlled from the onboard laboratory, where the video can be viewed real-time, via the armoured umbilical cable. At South Dorset, we have seen many Dahlia anemones, carpets of brittlestars, plenty of crabs, and colourful encrusting sponges and sunstars. 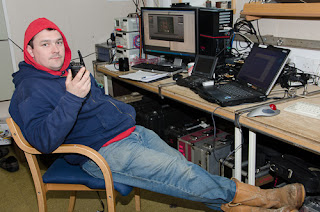 Here is Marc, one of the night shift videographers. He is in charge of adjusting the settings of the camera, “pressing the shutter” to take still photographs, and making sure that the video is actually recording the images.

During a video tow, still photographs are taken at 1 minute intervals (see the MESH habitat mapping guidance, http://www.searchmesh.net/default.aspx?page=1562) for statistical purposes. A photograph is recorded also when particular features or species are seen on video to help aid characterisation of the habitat. 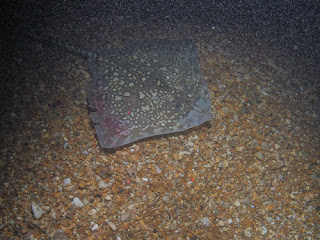 A fish!!! Cheered us up after a rather boring camera tow on sand, in the middle of the night. We think this is most likely to be a thornback ray (Raja clavata) (or half of it) (photo by Marc) 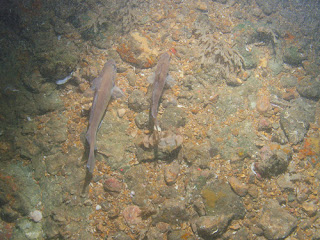 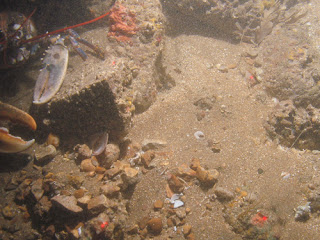 Here is another shot taken at night, a European lobster (Homarus gammarus)(picture by Marc)

When possible, in areas with soft sediments, we collected sediment samples using the Hamon grab. A highlight was finding some small fossils visible in the photo below. 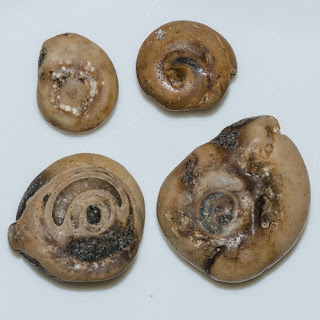 More news from us soon!