Hello from the Endeavour!

We are currently at our third survey site: “North St George’s Channel”.  From the plotting room, we have an amazing view out over a sparkling blue sea, and we can see in the distance the Isle of Man, Northern Ireland, Wales (Anglesey), and Scotland.

We are still collecting video footage and still images of the seabed and have visited about half of the planned 150 stations at this site.  The weather has been good for the main part, though we have experienced strong tidal currents, and all is going according to plan.

In between collecting evidence of the seabed habitats, our resident twitchers have been photographing and identifying the many seabirds following the Endeavour. In today’s blog we would like to share some of our favourite pictures of the seabirds in the Irish Sea. All of these images were taken by our on-board photographer, Eleonora, in strong winds when the birds were closest to the boat.

We have seen plenty of gannets. These large birds were not afraid to come very close to the boat.  We’ve seen them plunging in the sea like bullets from a great height to catch fish (sorry, no photo of them doing this as yet). 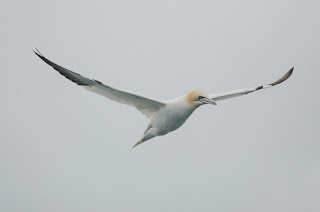 A large flock of fulmars also followed us, possibly to get a break from the strong winds, or maybe hoping to get an easy meal. Fulmars are foragers and have a varied and diverse diet. These birds are relatives of the albatross (albeit much smaller), they look like sea gulls for their grey/white colours, but are easily distinguishable by their distinctive shape and a bump in their beak. The bump is used to expel extra salts ingested with their fishy diet. 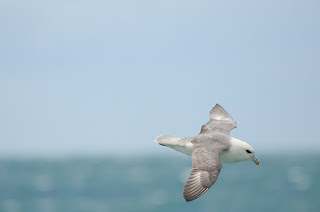 We have seen some guillemots, which are the commonest auk in the British Isles, but they were not at all interested in us and we only saw them in the distance. If you squint at the image below you may just be able to make them out. 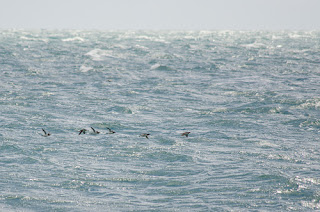 Kittiwakes were also flying at the stern of the Endeavour, seeking shelter. These elegant sea birds are often seen in the open sea, usually feeding on waste from commercial fishing vessels. They fly to the UK to breed and they return to the Atlantic in winter. 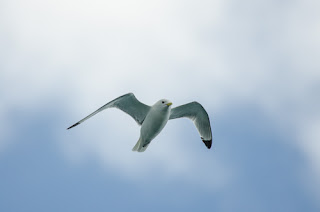 A slightly more unusual visitor, spotted by the night shift, was a very bedraggled male wheatear, pausing for a break on its long migration back from Africa to breed. He rested on our grab for a short time and we managed to take this picture of him. 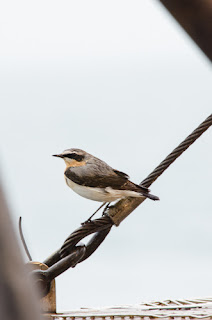 On the same day we also had a small yellow bird visiting the night shift flitting around inside the dry lab. The unidentified bird was a flash of yellow darting across the room, hitting Steve, and flying out again. Seeing these little birds flying away towards a vast dark sea, made us better appreciate the vast scale of their migration and the amazing effort that must be required.

As well as benthic macrofauna and seabirds, we have also observed harbour porpoise and common dolphins. Unfortunately, these encounters were too brief to photograph.