Six week survey of Marine Conservation Zones due to start

On Thursday 18th April, six weeks of survey work will start focussing on collecting additional data for recommended Marine Conservation Zones (rMCZs). Time will be split into two back-to-back surveys of three weeks designed to gather more evidence for some of the MCZ recommendations made by stakeholders in 2011.

Within the first survey, three members of JNCC staff will join the Cefas Endeavour research vessel, to undertake detailed survey of three recommended MCZs within the offshore as well as one site within inshore waters. East of Haig Fras is located north west of Lands End and North St George’s Channel and Mid St George’s Channel are located in the Irish Sea (see map below).  As there are already some acoustic data available for the sites, the survey work will focus predominately on groundtruthing, using seabed imagery and grab samples as appropriate in order to better characterise the seabed habitat. 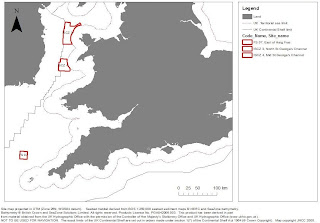 All three weeks of the second part of the survey will be dedicated to gathering data for one offshore recommended MCZ. Two members of JNCC staff will join the research vessel at the end of the first survey to head off to the far south-west approaches to survey a site known as South-West Deeps West.

The main aim of these surveys is to gather additional information on the presence and extent of features within sites in order to support the recommendations and aid decision-making on the designation of sites.

Further information on the recommendations made by the regional MCZ projects, along with JNCC and Natural England’s advice can be found on our website.
Posted by Hannah Carr at 17:17