To Haig Fras and beyond!

The RV Cefas Endeavour set sail from Lowestoft at 1am on May 9th carrying 15 bleary-eyed Cefas and JNCC scientists, a hardy crew commanded by the seasoned Captain Terry Byrne and enough teabags to see us through our three-week adventure in the Southern Celtic Sea. The JNCC team consisted of JNCC lead Mike Nelson; experienced monitoring scientist Joe Turner; Siobhan Vye, Haig Fras Site lead; and Charli Mortimer, a member of the Marine Evidence Team. 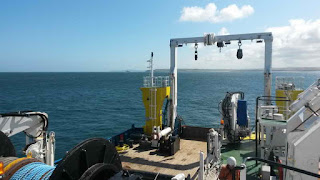 The 12-hour steam to our first site provided no time for rest and we were encouraged into action by the lively Captain Terry, who ordered numerous safety drills to put us through our paces and test our sea legs. In chance moments stolen between muster drills, we set to work constructing what would be the nerve centre of our operations: dry lab HQ, a complex labyrinth of technical equipment and cables concocted (and only truly understood) by day-shift lead, Simon Pearson. 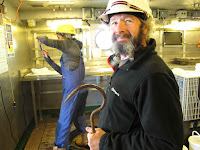 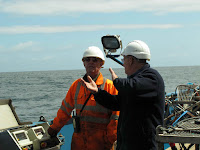 Amongst such frenzied activity, the Endeavour motored steadily towards our first sampling site; the dynamic rocky outcrop of Haig Fras located 96km northwest of the Isles of Scilly. Haig Fras Site of Community Importance (SCI) is designated due to the presence of Annex I reef and is the only substantial area of rocky reef in the Celtic Sea beyond the coastal margin. The aim for this survey was to collect data to inform the development of monitoring options for Haig Fras SCI and the rocky habitats that are found at the site. We planned to collect data on benthic fauna and environmental variables that will be used to establish a monitoring time-series that can help us to explain long term spatial and temporal patterns in benthic faunal communities found at Haig Fras SCI.

The reef rises to only 38m below the surface at its highest point, where small patches of algae can be found indicating that there is enough light for photosynthesis to occur. With the surrounding seabed reaching depths of over 100m, these variations of depth and substrate lead to an impressive array of marine species. At shallower points of the shoal, the bedrock is peppered with the Devonshire cup coral Caryophyllia smithii and Jewel anemones Corynactis viridis, whilst at deeper depths, boulders and cobbles support branching and cup sponges and the Ross coral Pentapora fascialis. 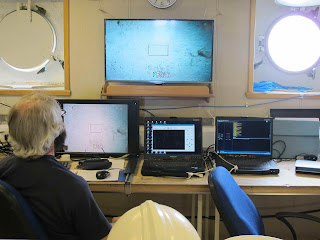 After getting off to a slow start with a high swell that complicated the positioning of the drop camera frame above the sea floor, the survey team picked up the pace and managed to complete all 91 planned camera stations in five days. This was partly achieved by the usual competitive rivalry between night shift and day shift and a plentiful supply of chocolate. At each station, the team completed a 200m HD camera transect with still images manually taken every 30 seconds using an additional dedicated stills camera. Haig Fras is a beautiful site and there is always a willing scientist on hand to assume the role of ‘photo fixer’, eager to capture some of the stunning marine biodiversity revealed by the drop camera.
1)                                                   2) 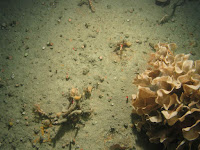 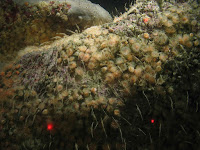 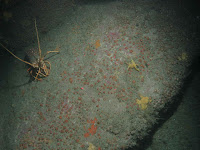 With all of our planned sampling stations visited at Haig Fras, we steamed towards East of Haig Fras MCZ our second sampling site for this survey.