The Cefas Endeavour has now moved onto the rMCZ Start Point, within this site we will be conducting a multibeam survey – collecting bathymetry data of the seafloor.
Start Point is the final destination of the Endeavour before it steams back to port and we leave the ship - after a long time of only seeing water it is nice to be able to see land again!

While multibeaming over the Start Point rMCZ we have gone over several charted wrecks, one of which can be clearly seen on the backscatter image below.


Since the previous blog post, we have visited North West Jones's Bank rMCZ and the South of the Isles of Scilly rMCZ. We were hoping to see some dolphins or marine mammals around the Isles of Scilly but unfortunately a thick fog meant that we had very limited visibility. We have however seen lots of gannets and they have kept everyone entertained with their aerial acrobatics and their dives into the sea from high above the water.

Every week onboard the Endeavour a safety drill needs to take place, yesterday there was a drill that a member of the crew had been seriously injured within the engine room of the ship. Trained members of the crew were required to dress in breathing equipment and use a stretcher to lift the injured staff member out and onto the deck to await a helicopter rescue. At the same time there was a suspected fire on board so trained firefighters were sent to investigate. Some pictures from the drill are shown below.

Hello again from the JNCC survey.

Since the last blog we have been spending the majority of our time carrying out ground truthing activities to verify the multibeam and side scan sonar that we have already collected in the Greater Haig Fras rMCZ. Groundtruthing involves both taking video and photo evidence of the seabed – using cameras which are attached to the grab equipment, or attached to a sledge and towed along behind the survey vessel; and taking physical ‘grab’ samples which can be analysed in the lab to determine the different type of sediment and the organisms living within it, in different areas of the seabed.

So far we have seen some interesting species and habitats including rocky areas containing sponges, urchins, starfish, brittlestars, and anemones; and muddy habitats which support communities of burrowing species including Nephrops – some of which can be seen below.

The grabs have also pulled up from the deep some moon jellyfish species that became entangled in the equipment. These small jellyfish make daily migrations to the sea surface to feed, before sinking back down to the deep.

Pirate attacks on the JNCC survey....

For Laura and I, the Cefas Endeavour will be our new home from home for the next two weeks with a bunch of crew and scientists from Cefas and the University of Exeter. We will be surveying the benthic habitat (sea bed) in rMCZ Greater Haig Fras, rMCZ North West of Jones Bank and rMCZ South of the Isles of Scilly as well as 'Haig Fras' SCI.
We joined the Endeavour in Lowestoft on Monday afternoon and we were immediately given a tour by the Scientist in Charge, Roger Coggan from Cefas. We were introduced to crew and other scientists on board and shown parts of the vessel which we will be becoming very familiar with, including the plotter room, wet and dry labs, our cabins and of course the mess. We got settled into our cabins and then discussed the Plan of Action for the survey with Roger and checked all the survey coordinates points. Then the serious business of checking out the local 'refreshment' point on shore was underway as the Captain gave us shore leave for the evening. This was an opportunity for the scientists to get to know each other, swap survey stories (we all have them) and discuss the finer points of acoustic surveying.

On Tuesday morning we left Lowestoft at 9am and steamed south, stopping briefly south of the Isle of Wight to calibrate some of the acoustic equipment. This is called a 'patch test' where a area of water is selected which is of a similar depth to where the equipment is going to be deployed during survey.

During this time we undertook a number of safety exercises including dressing in immersion suits, and preparing for pirates attacks - in which we had to fend off 'the pirates' by blasting them with the vessel's water hoses! Unfortunately for some staff the phantom pirates attacked just above their heads- resulting in a few soggy scientists!!

We finally arrived at Haig Fras (about 120km south west of Cornwall) at about 7am on Thursday morning. We began by collecting multibeam and side scan sonar between the two areas of reef which had already been fully surveyed in the Haig Fras SAC. The data collected here will be used to develop the management practices within the SAC to ensure that any areas of reef are fully protected, while not inhibiting any activities in other sediment areas.

The figure below shows the existing multibeam data, with the red/yellow/green areas indicating areas of potential reef, and the hashed area in the middle - the area which multibeam and sidescan sonar has just been collected during this cruise. 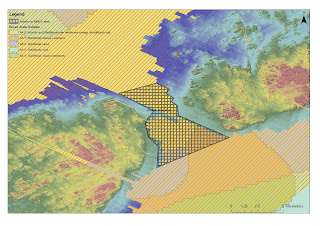 We are now collecting multibeam data from the whole of the Greater Haig Fras rMCZ (see the figure below for the lines which will be followed for the multibeam), and will later collect grab, camera and video samples from this area to ground truth the multibeam. The ground truthing will begin during the day shift today and will continue into the next night shift. 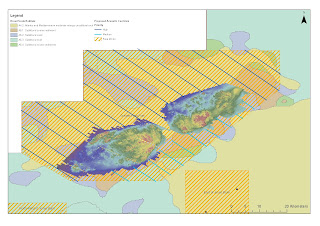 The highlight of the cruise so far, has been spotting some bottlenose dolphins (Tursiops truncatus) in the distance while sitting on the bow in the sunshine after a long night shift. We are still hoping for closer encounters during the cruise and will be keeping our eyes peeled for any marine mammals.....as well as any pirates!