To boom or not to boom?

Sunrise saw us arrive at the southern boundary of Croker Carbonate Slabs cSAC/SCI and we set to work! One of the interesting components of this survey is that we’ll be using a variety of specialised equipment to increase our understanding of the Methane-Derived Authigenic Carbonate (MDAC) feature for which the site is designated.

One of these is a type of sub-bottom profiler known as a ‘boomer’ that can be used to identify the presence of gas in the underlying geology below the seabed.  Identifying gas below the surface, especially areas where this gas may rise to the seabed, will help us to determine if MDAC is still actively forming. 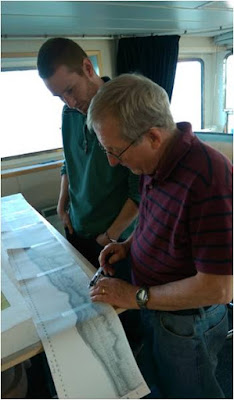 Our on board geologist and MDAC specialist Alan Judd has been busy reviewing and interpreting the sub-bottom profile data we’ve been collecting. ©  Neil Golding/JNCC 2015

The boomer is towed underwater behind the vessel and works by emitting low frequency sound directed towards the seabed, typically at frequencies around 0.5-1.5 kHz.  On deck, it sounds like a loud clap. The sound that is reflected off the different layers beneath the seabed, is recorded onboard and provides us with a seabed profile of about 40m depth below the seabed surface. 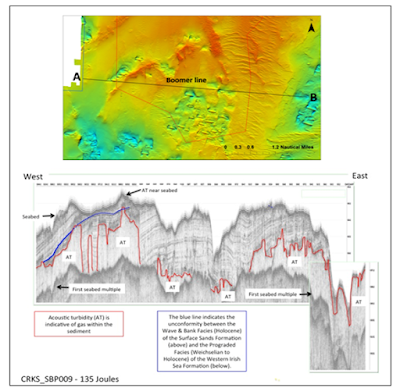 The use of the boomer introduces underwater noise into the surrounding water so we followed marine noise mitigation protocols (in line with JNCC seismic guidelines) to minimise any disturbance to marine mammals. We positioned a Marine Mammal Observer (MMO) on the bridge to carry out a pre-shooting search for whales and dolphins prior to the use of the boomer. On our first day of planned boomer operations, we were greeted by a pod of curious common dolphins that came and played in the ship's bow wave. As a result boomer operations were postponed. The next day, the pre-shooting watch was completed with no marine mammals in view and the MMO gave permission for the boomer to be used. The JNCC is currently reviewing the marine noise mitigation guidelines applicable to geophysical surveys to ensure they remain up to date and fit for purpose. 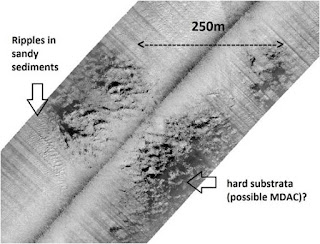 Another survey tool we regularly use on the RV Cefas Endeavour is the side-scan sonar, which is used to distinguish between hard substrata, such as rock, from the surrounding sandy sediment.  You can read more about this bit of equipment in our previous blog posts here.  Side-scan can be used to identify areas of potential MDAC on the seabed as well as the presence of gas seepage in the water column.

Full coverage multibeam echosounder data showing the seabed topography of the area had already been collected back in 2012 as part of another survey.  Using this existing data alongside the data collected on this survey helped guide the location of our underwater camera transects and decide where to take samples of the seabed.

By Alice Cornthwaite and James Albrecht
Posted by Unknown at 09:33