With half of our time at the Croker Carbonate Slabs behind us, and a large quantity of acoustic and video data already under our belts, at the weekend we started collecting some samples!

Collecting samples for analysis in the marine environment is unfortunately not as simple as on land. However, there are a number of handy bits of equipment that we can use. On this survey we are mainly using the mini Hamon grab, and occasionally a Day grab.

The Hamon grab is deployed from the boat to the bottom of the seabed, where upon contact a mechanism in the device allows the jaws to shut, taking in a sample of the seabed which can be up to 8 litres. Two samples are taken from  each successful grab, one for a Particle Sediment Analysis (PSA) to determine the sediment type present and another to examine the fauna (sea creatures) which are living within and upon the sediment. The Day grab differs slightly in design from the Hamon grab as the sediment maintains an intact surface layer allowing a sediment profile to be taken. The Day grab is being used in a few locations to provide further detailed information on what microscopic creatures live within the top five centimetres of sediment (known as the meiofauna).

We will be collecting grab samples from across the survey area to cover the range of habitats we’ve found. Any samples of possible methane-derived authigenic carbonate (MDAC) will undergo carbon isotope analysis back on land in the laboratory.  This will tell us whether the carbonate rock is in fact methane-derived. 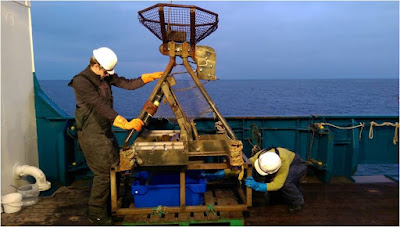 Collecting a sample from the mini Hamon grab. ©Neil Golding/JNCC 2015

Samples of ‘possible’ MDAC collected by the Hamon grab. ©JNCC\Cefas 2015

In addition to ‘possible’ MDAC in our grab samples, we have had a number of interesting critters, some of which we’ve seen on the video tows, including crabs, sand eels, anemones, feather stars, starfish and even a squat lobster!

The good weather conditions we’ve been experiencing have also allowed us to take water samples from a number of stations across the survey area. These will be analysed once back in the laboratory to look at the presence and concentration of gases. 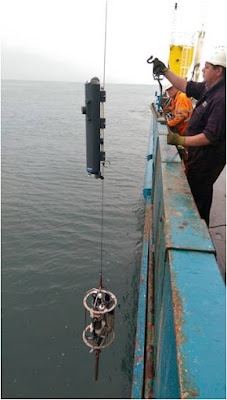 By Neil Golding and Chris Jenkins