With a full complement of scientists and crew on board, the RV Cefas Endeavour left Swansea docks beneath clear skies on Saturday 24th in the afternoon.  Prior to departure, a full safety briefing and drill was given by the ship’s crew which included the procedure for vessel evacuation in case of an emergency.  As an Endeavour ‘newbie’, James had the pleasure of squeezing into one of the flattering red survival suits – ideal attire if you need to leave the vessel in an emergency! 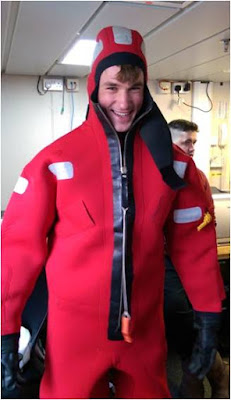 As we started making our way around the coast of Wales and north up the Irish Sea, we were greeted by a small pod of common dolphins who made a beeline for the vessel, playing in the bow wave. 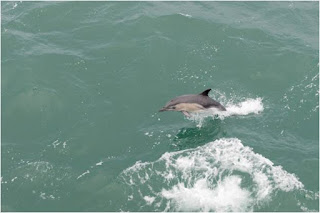 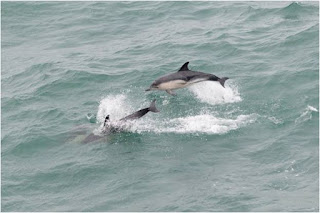 We have used our transit time to prepare for the deluge of data that will shortly be coming our way, as well as tweaking the finer details of the survey plan, such as the order of sampling. 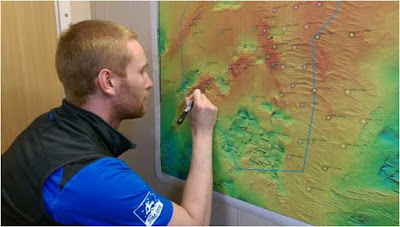 We interrupted our transit to do some critical equipment testing, especially as we’ll be using some new survey equipment unfamiliar to us such as the deep-tow boomer system.  This piece of acoustic equipment is towed underwater behind the vessel and works by emitting low frequency sound directed towards the seabed.  The reflected sound tells us about what is happening geologically beneath the surface of the seabed, and may give us clues as to the origins and formation of the feature we’re surveying: Methane-Derived Authigenic Carbonate or MDAC for short.

With a good weather forecast for the next few days, we’re set to arrive on site after breakfast on Sunday morning, ready to start collecting data!