Five days at sea and data collection is currently going well. We have had one period of bad weather which stopped surveying for 12 hours, but we all made it through to the other side. So far, the night shift have been collecting most of the information on the bathymetry of the seabed through sidescan sonar and the day shift have been collecting underwater video footage and grab samples of the seabed sediment and associated species.  We are utilising a sidescan sonar towed behind the boat as it enables us to distinguish between Sabellaria spinulosa reef and surrounding sediment from the different acoustic signatures of the two substrates.

If you have read the previous blog entries from this survey, you will already know that we are particularly interested in finding Sabellaria spinulosa (Ross worm). We have continued to find evidence of this species and in one grab sample we found reef that the worm had constructed, which looks like honeycomb made of sand (though the "honeycomb worm" is actually the common name of another species in this genus, Sabellaria alveolata). We broke the sample apart to check that it was occupied by the worm, which, in this instance, it was. 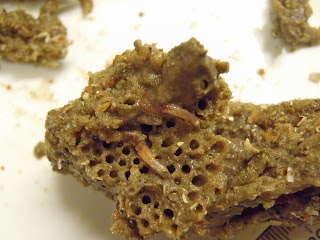 A cross-section of some Sabelleria spinulosa reef with worms occupying some of the holes (JNCC/CEFAS). Photo showing how Sabellaria spinulosa forms a reef allowing other species to thrive, such as this common starfish (JNCC/CEFAS). 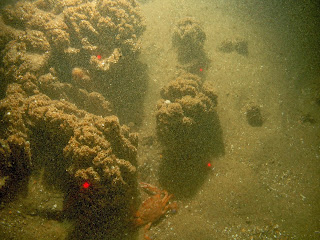 Sabellaria spinulosa reef forms solid structures out of the otherwise flat seabed creating shelter and hiding places. What species can you find in this photo? (JNCC/CEFAS)

We have now moved further south within the North Norfolk Sandbanks and Saturn Reef SCI to an area which is surrounded by gas platforms. On route to this new area, we took the opportunity to practise emergency drills and on this occasion a dummy was thrown into the water and “man overboard” was announced over the tannoy. We all assembled quickly at the muster station and took up lookout either side of the vessel as the captain turned the vessel around and the crew launched the workboat. It is reassuring to know that these skills are kept up to scratch and how well the crew all work together as a team. 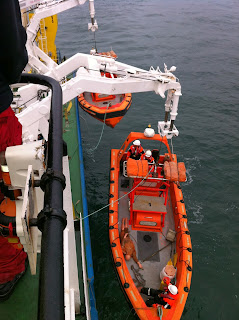