Conditions have certainly livened up over the last 48 hours! The wind has been gusting up to 45 knots and lots of small birds have landed on the boat to shelter from the weather. Luckily the Scotia (and its crew!) are taking it well and we’ve been able to continue collecting data without problems so far.

It’s been over a week now since we left Aberdeen, and we’re starting to get a good picture of our survey site. The main section of Pobie Bank Reef is located at depths of 70 – 100m, and is made up of bedrock and large boulders, surrounded by a mixture of sediments. We’re currently collecting acoustic data in the third survey block, where we’ve detected some large, dramatic rocky outcrops. Previous studies of the site have mentioned these topographically complex areas, and we’re looking forward to putting the camera down to find out more.

The rocky reef provides a hard surface for a range of sea life to establish on, including communities of encrusting sponges and bryozoans. The cup-shaped Axinellid sponge (Axinella infundibuliformis), has been seen regularly during the camera tows. Other species commonly spotted include cup corals (Caryophyllia smithii) and the brittlestar Ophiura albida. We’ve also seen hermit crabs in abundance, several squat lobsters, and even had a ling (Molva molva) following the camera plum line on one of the tows. We’re not sure if he was curious or hungry! 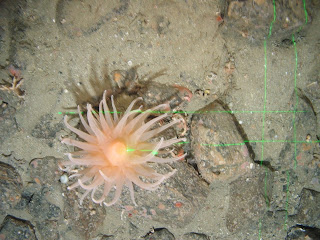 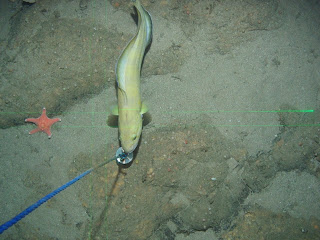 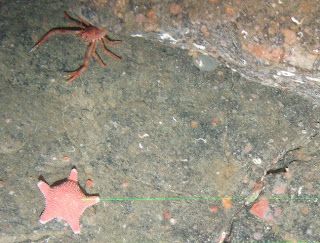 As certain people onboard are very enthusiastic about Cetaceans (whales and dolphins), the bridge kindly called down to the office on Friday morning to let us know when four killer whales joined us right next to the ship! Unfortunately, the whales did not take into account that the day shift had just started a camera tow and were busy following a transect. Stuck in front of the computer in a windowless lab, the scientists desperately hoped that the whales would stick around long enough for them to finish the line. Having just finished work, the night shift were obliviously eating their dinner upstairs, until they spotted the others on the look-out. We were all too late, of course, and so none of us got to see the “pandas of the sea” this time. But we are, somewhat optimistically, hoping they might come back soon. Anything can happen at sea!