Rock around the clock

The last few days have been busily spent ground-truthing at stations across section 3 of the site. The seabed within box 3 has been particularly interesting, with complex sections of bedrock and boulders, providing homes for a range of wildlife. The underwater video has identified some especially vibrant scenes, such as the wall of brittlestars, orange dead men’s fingers (Alcyonium digitatum) and as yet unidentified purple encrusting species shown here. 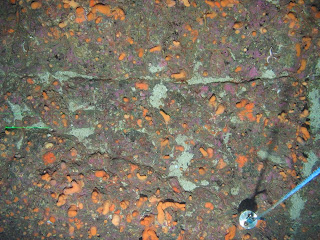 We’ve also seen several sunstars, different types of crab and anemones. We had another ling follow the camera plum line and a large cod came into the view of the video for a while – our camera seems to be getting lots of attention from the locals! We’ve seen lots of sponges, ranging in colour from white to bright yellow and orange. 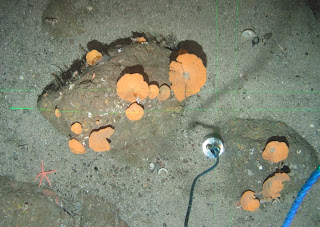 The slight time delay on the digital camera and the motion of the camera in the water means that taking the perfect picture requires a mixture of skill and luck. It's important that the pictures are of good quality, to ensure that the animals and habitats can be successfully identified. This has led to a bit of friendly rivalry between the JNCC staff on board as to who can capture the best image. Watch this space - the winning image will be shown on the next blog entry!

In addition to using the underwater camera, we’ve also been taking grabs of sediment where possible. Once samples of sediment have been taken, the sample is then washed in a washing machine like sieve to washing away the finer sediment. The water pressure in the sieve seems to have a mind of its own, frequently splashing both the user and unsuspecting passers by!

The dayshift were surprised to find a “mermaid’s purse” in one of their grabs, which is the egg case of a shark or ray. The night shift found two small cup corals (Caryophyllia smithii) on a stone in one of their grabs. This species of stony coral is similar to anemones but produces hard chalky skeletons to support and protect their bodies. 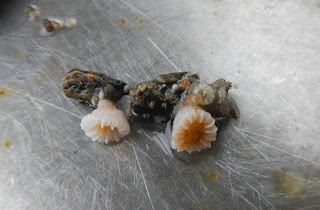 Now that the ground-truthing has been completed, we’re back to collecting acoustic data for an additional section of the bank. We’ll continue with this until around 8pm this evening, when we will say goodbye to Pobie Bank Reef and begin our steam back to Aberdeen.