Our progress has gone well over the last few days which has been helped by the good weather! The sea has been kind to us, which has made our job much easier. Whilst processing grab samples on Tuesday night, the day shift was treated to a beautiful sunset over Shetland in the far distance, and the night shift got to see the sun rise the following morning. 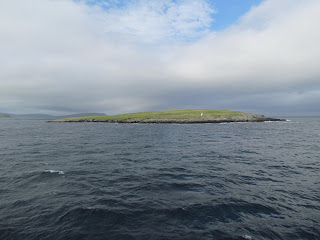 Finally, the acoustic work for box 1 has been completed!! The data has been used to identify 18 ground-truthing stations distributed throughout the box. Ground-truthing usually involves towing a camera just above the seafloor, which transmits a live video feed back to the ship showing us the different species and habitats that are down there. We’re also able to see how the seabed changes within and between stations, from sandy sediment to boulders and bedrock; it keeps the camera operator on their toes as big rocks often loom out of the darkness with no warning! 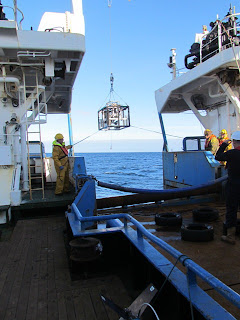 As well as collecting video, we also take regular photographs to help with identifying the animals we find. So far, we’ve seen several species of fish, including a well camouflaged monk fish, as along with an assortment of sponges, sea urchins, anemones and plenty of impressive starfish. This has started a competition between the scientists on board as to who can take the best photo! 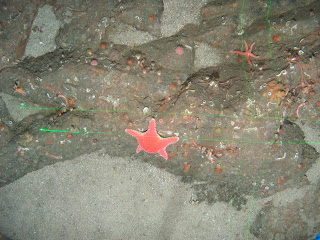 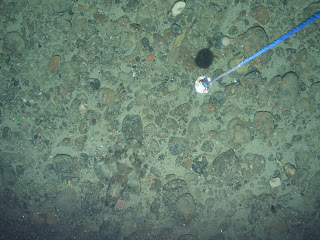 If we find areas of sediment on the seabed, we may also collect samples from it using a grab. The stuff we scoop up can be analysed to determine exactly what type of sediment is present and also to identify any animals that like to burrow into it. But more about this in a future entry!

Now that the 18 stations have been completed, we have moved on to section 2 and have started to collect more acoustic data. The weather charts are showing lots of bright colours over the weekend, which generally means that stormy conditions are around the corner. We are trying to get as much data collected beforehand as possible, whilst also hoping that the forecast turns out to be wrong!