The video footage from the towed camera sled revealed some interesting creatures over the last couple of days. We had finished surveying the Central Fladen site and moved to a core area in the south east where the tall sea pen, Funiculina quadrangalaris, had been found previously. Everyone waited with baited breath as the camera sledge was lowered around 140m to the seabed in the location where the tall sea pen was spotted in numbers on a survey in 2010. We weren’t disappointed. Tall sea pens, often with a brittlestar clutching the top, were found spread along the video transect. It can be difficult to differentiate between the tall sea pen and the slender sea pen, Virgularia mirabilis, without a physical specimen to examine. The tall sea pen is larger and tends to bend slightly at the top, but juveniles could look very similar to the slender sea pen. 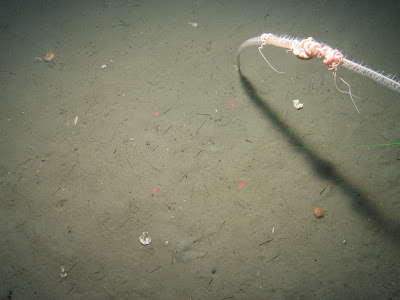 Above is an image of F. quadrangalaris, with what we suspect is the obligate commensal brittlestar, Asteronyx loveni, wrapped around its body. A. loveni is often found in close association with large Anthozoans such as Funiculina, so we are fairly confident of the identification, but this will be confirmed when back on shore. It has been speculated previously that the brittlestar may gain some advantage from climbing the sea pen, whilst not causing it significant harm. To give you some appreciation of scale, the laser dots on the seabed are 18cm apart.

As on all surveys, there is a goodhearted competition amongst the scientists to take the best underwater photo when in the video hot seat. There were a number of contenders from the day shift, but, for timing, this shot is a clear winner: 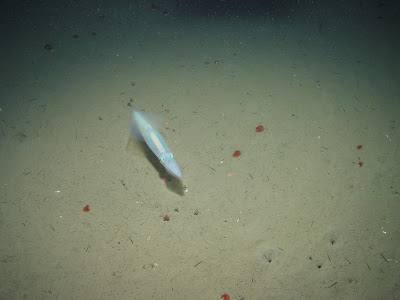 Another favourite of mine is this shot of two opisthobranchs, molluscs with an internal shell, appearing to be racing each other through the muddy sediment: 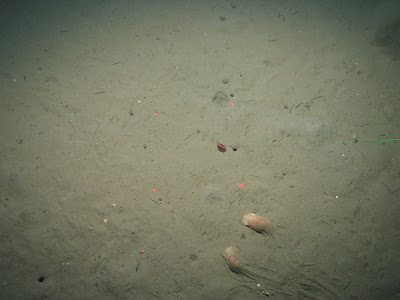 Other organisms we have seen on the survey so far include: 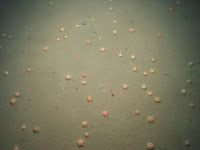 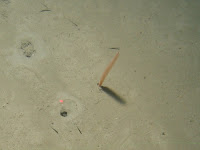 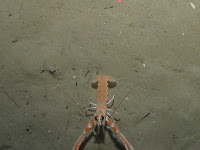 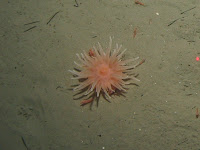 Deeplet sea anemone - Bolocera tuediae. It is thought that some species such as the shrimp here (possibly Pandalus borealis or Spirontocaris liljeborgii given the association) shelter from predators in the tentacles of the anemone and appear resistant to its stings.