We had a good day’s sampling yesterday. The Scientist in Charge gave both shifts a target number of stations to be completed in a shift to add an element of competition into proceedings. Day shift claimed a very marginal victory completing all their stations, while night shift completed everything but one camera tow.

We started work on the Central Fladen site which was predicted using UKSeaMap to have burrowed mud sediments with an area of slightly coarser sediments to the south east. The tall sea pen, Funiculina quadrangularis, has previously been identified in this region and we hope to confirm its presence here with camera tows. We began with sampling stations to the west of the site, moving from south to north. One grab sample was taken at each station using the Day grab. These samples will be used to determine the sediment type and provide information on the macrofaunal community present in the sediment. 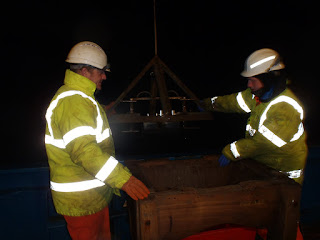 The first grab of the survey taken by night shift sampled sandy mud as expected. Hurray! We also found a hagfish in the sample; a creature not likely to win a beauty contest (although no doubt other hagfish find them attractive). They are well known for releasing an unpleasant slime into the sample. 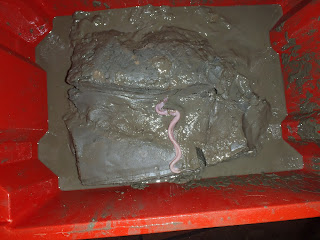 Every three stations a camera sledge was deployed to collect video footage and stills of the seabed. This footage will show what fauna is present on the surface, and we expected to find evidence of various burrowing megafauna including seapens and Norway lobsters (Nephrops norvegicus). We were pleased to find that the video also confirmed that burrowed mud was present. We frequently identified the sea pen Pennatula phosphorea, which looks like a red feather, and occasionally the seapen Virgularia mirabilis, as well as seastars and hermit crabs. 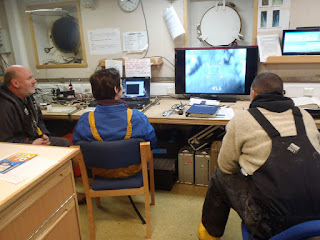 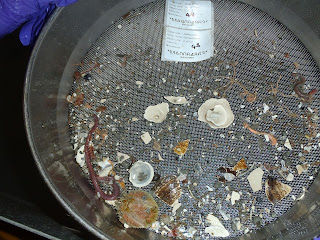