Is that mud again?

The survey team has been working at full steam over the last couple of days making excellent progress. We have completed the Central Fladen site and Western Fladen site, and are now progressing quickly through the final South East Fladen site. We’ve had very varied weather with the day shift getting lucky with a burst of bright sunshine, as well as winds exceeding 40 knots, and night shift witnessing a brief flurry of snow. 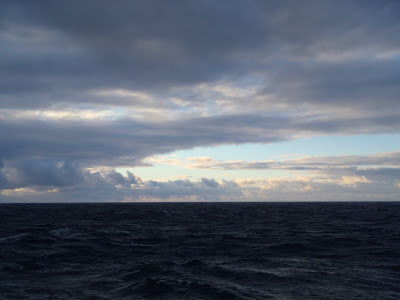 The South East Fladen site has mud sediments similar to the other sites with perhaps slightly less sand. There have been no tall sea pens found in either the grabs or the video footage, but the slender sea pen, Virgularia mirabilis, can be seen in abundance. At present, Central Fladen site is the only one of the three to contain the tall sea pen. V. mirabilis is locally common on all coasts and is found at depths of 10-400m. It can grow up to 60cm long and is able to withdraw into the sediment when disturbed. 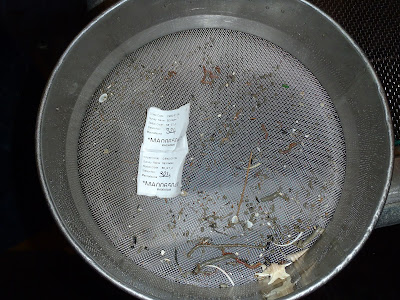 Photo of seapen in 1mm fraction of grab

Looking at maps of fishing activity over the last five years, it appears that this area of the Fladen grounds has been fished more heavily relative to the other sites, so we expected to see evidence of this on the seabed. On a few of the camera tows there were as expected a few obvious trawl marks in the mud with more marks that appeared to be older and that had started to backfill with mud. It was clear to us how busy this area usually is as, whilst we were sampling, there were several fishing vessels, a number of oil platforms and a drilling boat in the vicinity. 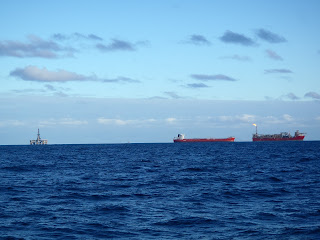 Image of tankers and platform

The fishery in this region generally focuses on catching the Norway lobster (Nephrops norvegicus), although bottom-dwelling fish may be caught also be caught in the net. We captured a number of fish and shrimp on camera, but the Norway lobster remained elusive leaving only burrows as evidence of its presence. Nephrops live in a gallery burrow that can be very large, with tunnels over a metre in length and up to 10cm in diameter. The burrows have a number of entrances and it is possible to estimate the number of animals from the number of burrow entrances sighted on a video tow, though this is problematic as other species also create burrows in this habitat. For example, burrowing crabs such as Goneplex rhomboids, have also been seen during this survey and create burrows similar to Nephrops, though slightly smaller. Marks observed near the entrance to the burrow can also be used to tell if the burrow is still occupied. 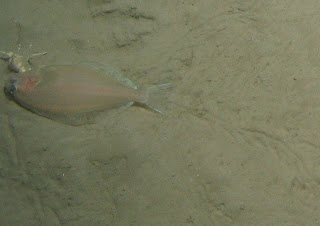 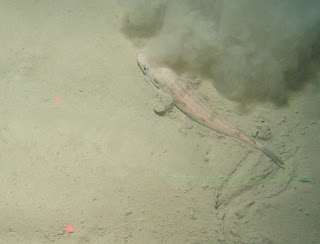 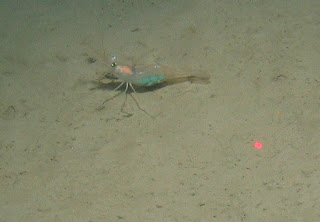