Into the North Sea

Hello and welcome back to the JNCC marine survey blog. We joined the Cefas Endeavour at the Tees North Sea supply base in Middlesborough on Saturday 12th May and set sail early on Sunday morning.

Our Cefas colleagues have been hard at work for the last two weeks gathering multibeam, grab and video data for Markham’s Triangle and Fulmar recommended Marine Conservation Zones (rMCZs). On this part of the survey we will be collecting multibeam and video data in Berwickshire and North Northumberland Coast Special Area of Conservation SAC (BNNC SAC) and multibeam, video and sediment grab data in Swallow Sand and Holderness Offshore rMCZs. The map below shows the rMCZs and Berwickshire and Northumberland Coast SAC. The rMCZs which were surveyed during the first part of the survey are in purple and the rMCZs to be surveyed on this part of the survey are in green. 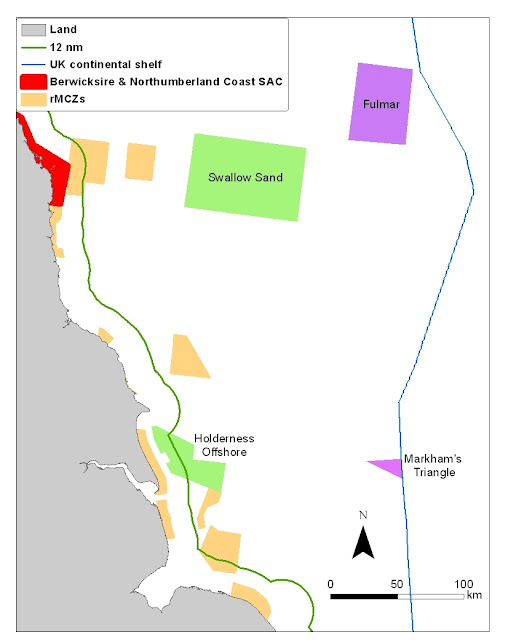 As the forecast was predicting gale force winds when we left the Tees, we headed straight to BNCC SAC, the closest site to shore, to avoid the worst of the weather. We arrived around 3pm and conducted a CTD before starting detailed mapping of two areas, Holy Island and Farne Islands. Both areas have now been groundtruthed with video and still images and we’re now mapping a third area called Dunstanburg.

For this first blog, we’ll show some of the results from Markham’s Triangle rMCZ (see pg 230 for more information). It has been recommended as an MCZ for its subtidal coarse sediment and subtidal sands and covers an area of around 200km2. The multibeam survey was designed to give approximately 75% coverage of the site. Multibeam data provides both water depths and backscatter data which gives an indication of the substrate type. The strange gap in the multibeam data is due to the Chiswick Field Well which was situated in the middle of some of the survey lines. Sediment grabs were taken at 50 stations to ground-truth the multibeam data. Video and still imagery were also collected with the drop camera from 22 stations. 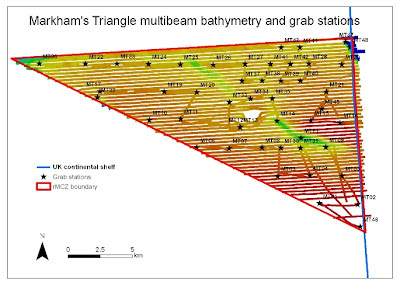 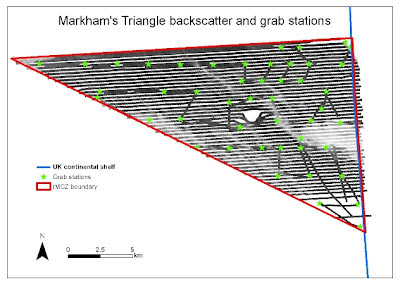 Posted by Fionnuala McBreen at 16:28