Four members of JNCC staff have joined the Marine Scotland research vessel ‘MRV Scotia’ for the next two weeks to undertake a detailed survey of the Wyville Thomson Ridge candidate Special Area of Conservation. The Wyville Thomson Ridge is a rock ridge situated in the Atlantic Ocean at the northern end of the Rockall Trough approximately 150km north-west of Cape Wrath, Scotland. The site was submitted to the European Commission in 2010 for its reef features and has since been made a Site of Community Importance (SCI). 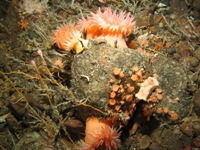 Wyville Thomson Ridge rises from 1000m at its deepest point to 400m at the summit. Along the ridge there are large areas of stony reef, thought to have been formed by the ploughing movement of icebergs through the seabed at the end of the last ice age. Bedrock reef is present on the flanks of the ridge and, due to the differences in water masses, there are different species compositions on either side.These reef communities comprise sea urchins, sea spiders, sea cucumbers, dense beds of featherstars and brittlestars, a range of colourful sponges and both cup and soft corals.

The main aim of this survey is to obtain evidence to facilitate fisheries management discussions in relation to Wyville Thomson Ridge SCI.  In addition, the survey provides an opportunity to improve our understanding of habitat distribution and community composition within the site and develop methods for future site monitoring.

After surveying Wyville Thomson Ridge, the vessel will transit to an area near the Faroe-Shetland Channel to investigate the extent of deep-sea sponge aggregations for the Scottish Marine Protected Area Project.
Posted by Hannah Carr at 13:33