We have been busy here at North-east Faroe Shetland Channel since the last blog post. We have all managed to get our sea legs now and have managed to complete all of the chariot video tows. This type of video tow is useful as the equipment can be towed much quicker and for longer than the drop frame camera system (more on that later), allowing us to view a much larger area of seabed. During these tows we have seen a large variety of deep-sea sponges and many different deep-sea fish. 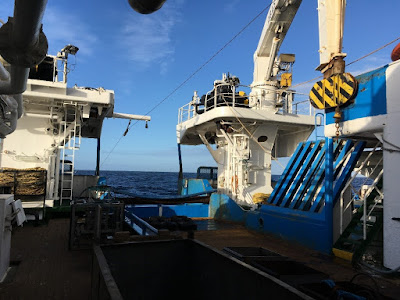 To make the most of the time we have at sea, the team has been split into two, allowing sampling to happen 24 hours a day. Half the team works the “day” shift, midday to midnight, and the other half work “night” shifts midnight to midday.

We have also been making headway with the grab sampling. This consists of sending the equivalent of a large spade down to the 500m depth and scooping up a small amount of the seabed which we then subsample to investigate sediment particle size. The remainder of the sample is sieved through two different sized sieves to see what marine life and seabed material we have picked up in this area.

Listening to a variety of musical tunes, going through the decades from 70’s to 80’s, through the shifts has helped the work move along, with the addition of tasty meals and plenty of chocolate and biscuit snacks. We are now moving onto the drop-camera survey. This camera allows us to take high quality still images, which will later be used to identify the different animals seen in the chariot videos.

Sadly, Storm Brian managed to find us yesterday evening, raising the waves to stomach churning levels. Work was suspended as the winds picked up to levels which did not allow us to continue grabbing or video work. This gave the team plenty of time to make sure all the information we had collected was backed up to the various hard drives and computers. It also allowed some time for making sure all of the data is in the correct format, writing blog posts and fixing any computer glitches.

All Images Copyright JNCC.
Posted by Unknown at 10:27