North West of Jones Bank and the Canyons Survey Update

On the 22nd of May 2017 a partnership JNCC and Cefas monitoring survey to North-West of Jones Bank (NWJB) MCZ and The Canyons MCZ departed from Lowestoft. Just under 48 hrs later RV Cefas Endeavour arrived on site at NWJB MCZ having replaced a Waverider buoy south-west of the Isles of Scilly. The buoy is now running, with the data viewable.

At NWJB MCZ two day grabs and a 200m video sledge transect were collected at 71 stations. The day grabs at NWJB have been sampled for macrofauna, particle size analysis (PSA, aka sediment size) and organic, carbons and nitrogen. When sieving out the mud, the fauna has been mainly polychaetes (aka worms) of all shapes and sizes, which we need to pluck out of the sieve to make sure we don’t miss any of the important diversity in the final analysis. We have also found the occasional Nephrops, a small crustacean you may know as scampi. These bury in muddy sediments, forming semi-permanent burrows that create part of the Feature of Conservation Importance ‘Sea-pens and burrowing megafauna’. We’ve also found a few amphipods, crabs and sea-pens in the grabs. 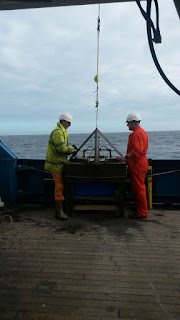 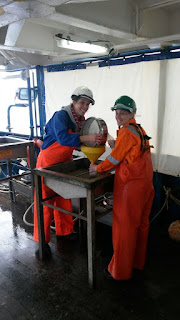 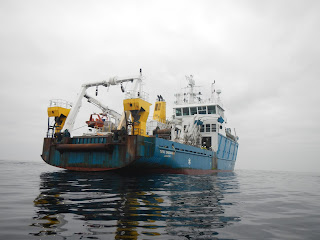 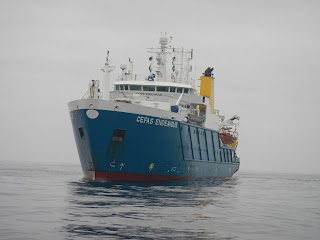 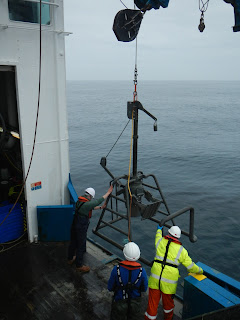 In addition to the grab and video data, 14 NIOZ cores and 4 day grabs were acquired to support wider work on shelf biogeochemistry being carried out by Cefas.

After a 10 hours transit to the south-west the RV Cefas Endeavour arrived at The Canyons MCZ. Work has been completed on interfluves, the shallower area (200-500m) between the canyons themselves which reach down to ~2200m. The canyons themselves are named Explorer and Dangeard, with Explorer being the northern one of the two. The habitat on the interfluves is mainly muds with a veneer of sand, but the site is also comprised of ‘mini mound’ features, where coral may have been present in the past. 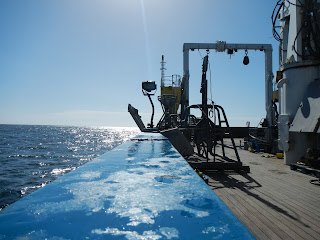 Drop camera transects and NIOZ cores are being carried out on the interfluves. In total 113 stations have been sampled across the two interfluves. Some interesting species have been seen at the interfluves. This included a large number of the anemone Actinauge richardi. This anemone doesn’t usually live attached to a hard surface or burrow into soft sediments like other anemones. Instead its base forms an almost enclosed cup which encloses mud and sand acting as an anchor onto the soft sediments. 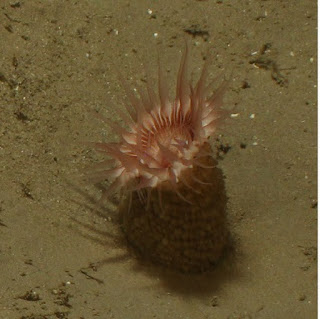 Different species of sea-pen have also been seen, including the tall sea-pen Funiculina quadrangularis, the phosphorescent sea-pen Pennatula phosphorea and what we think may be the deep-sea species Kophobelemnon sp., though this is not a confirmed identification. 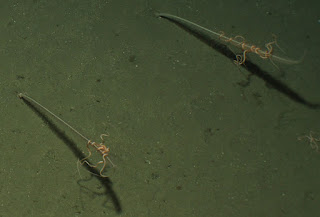 Numerous sea cucumbers have been dotted around, mainly the species Parastichopus tremulus, and a few pencil urchins Cidaris cidaris. 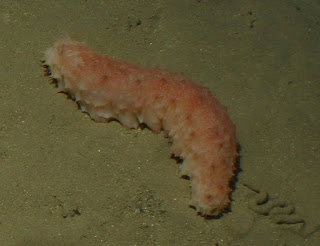 Some examples of a soft coral, which we struggled to identify, were found in the early hours of Sunday morning (4th June), with its polyps retracted. Luckily later in the day we captured a lovely example of it with its polyps out (and a sneaky squat lobster hanging out). On discussion with some of our deep-sea colleagues, we think it is a soft coral of the Alcyoniidae family, likely to be a Drifa species. These can be identified fairly well by their shape as they look rather like cauliflower. 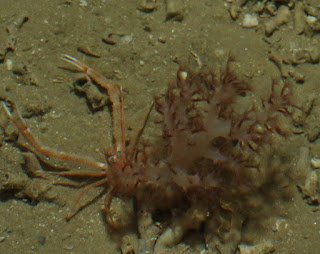 During our drop-camera transects on the interfluves, we have identified five species of Elasmobranchs, including some deep-water species. One of these species is the velvet belly lanternshark (Etmopterus spinax), which is one of the smaller shark species with a maximum total length of 60cm. The individuals we have seen have been ~30cm in length. This species occurs in depths between 200-500m and uses hormones to control small pigment-lined structures called photophores (seen as dark blotches on the belly) to emit light for camouflage (to predators below), and possibly to communicate with other lanternsharks. 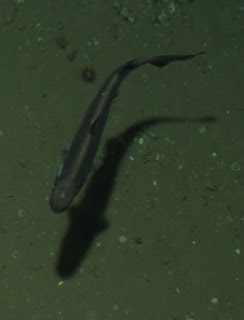