While Mark T stood on the bow, making up part of the cetacean survey team, myself and Paul French enjoyed much more comfort, in an observation box in a lofty position (8.5 m) on the monkey island, from where we carried out our seabird observations. This is our view of Mark T (on the left) as he and Darren carried out their primary observer duties. 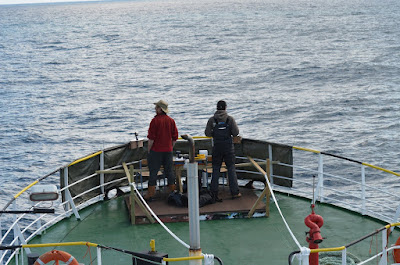 We were collecting data using the ESAS method, to a standard that will be compatible with the ESAS database. This means that the data will contribute to a database that contains over 3 million records of seabirds, with the first data collected as long ago as 1979. In spite of the fact that a lot of seabird surveys now use digital aerial methods, the ESAS database remains a hugely valuable resource on the distribution and relative densities of seabirds at sea in north west European waters. Adding the data collected on this survey is particularly important as data are relatively sparse over much of the area that we covered on SCANS 3. The figure below shows the locations of all of the ESAS data points (each tiny grey dot), and how sparsely they are distributed in our more western waters. The black line represents the coverage achieved during the first part of SCANS 3. 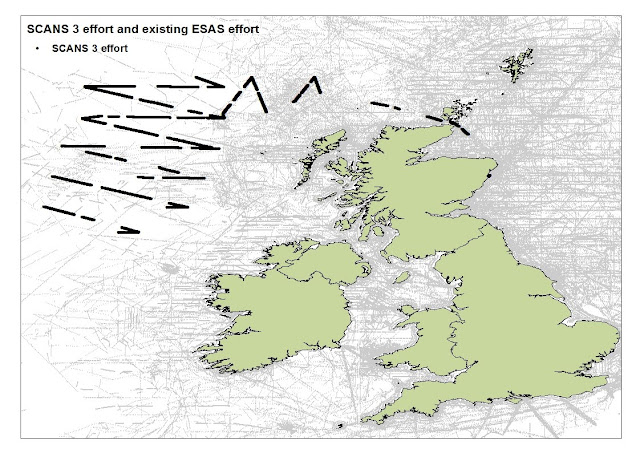 The distribution of ESAS data within (and beyond) the UK EEZ, before the SCANS 3 data were entered.

As the area was so data poor, Paul and I were hoping for a few surprises. Although the hoped for rarity didn't materialize, we saw plenty of interesting birds. See the next post in the for a summary of some of the great pelagic birds that we encountered!