Sea pens and quahogs – the mysterious world of offshore mud

Good morning from the night shift! We’re now about half way through our survey and have settled into life onboard the good ship Scotia, where disadvantages include getting up at midnight and advantages include having a full English breakfast for lunch!

On this survey we are investigating the habitat ‘features’ for which the two nature Conservation Marine Protected Areas (NCMPAs) we are visiting have been designated: the ocean quahog and ‘offshore deep sea muds’. We are gathering an initial dataset on these features which will inform future monitoring and assessment. The goal is to determine whether there are any changes to these features over time. 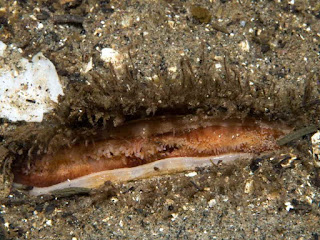 You’ve already heard a little about the amazingly long-lived Ocean Quahog, or Arctica islandica for latin speakers (see previous blog post). This clam is typically found buried in sandy and muddy sediment with two feeding tubes called siphons peaking out above the seabed surface.  These siphons are pretty tiny and, although they can be captured using high resolution photography (see picture above), they are very difficult to spot using the underwater camera sledge. It is, therefore, far more effective to record the quahogs using a seabed sediment sampler. Encouragingly, we have already found evidence of quahogs, and have collected both live specimens and many shells in our grab samples.

The living ocean quahog shells are brown in colour whereas the dead ones tend to be mostly white. Any live specimens found within the grabs are measured and photographed by the scientists onboard before being returned to the sea. The shells recorded so far have ranged in size from very small juveniles of less than 1 cm in diameter to adults of up to about 8 cm.

The ‘offshore deep sea mud’ habitat is associated with communities of sea pen (a type of soft coral that grows in the shape of a quill) and large burrowing crustaceans such as Nephrops norvevicus, also known as scampi or the Norway lobster. We have three common species of sea pen in the UK – Pennatula phosphorea which is a very distinctive red feather, Virgularia mirabilis which is straight and upright with white polyps, and Funiculina quadrangularis which is very tall, bowed at the top, and found in deeper waters. 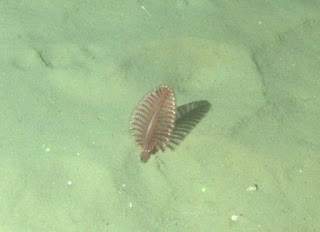 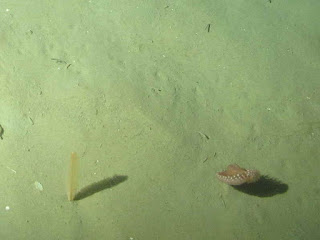 As the camera sledge descended for our first tow, we were happy to see a large number of Pennatula sea pens spread across the seafloor, interspersed with a few Virgularia. All our video transects so far have shown evidence of sea pens, and at some stations we have also found high numbers of burrows with the occasional Norway lobster sticking its head out. It is likely that burrows are found in the areas with a higher proportion of mud rather than sand, but we will have to wait for the results of the particle size analysis of the sediment samples to confirm.

We’d better get back to work!

By Megan and Yessica