On the 28 October 2014 JNCC will embark on a 14 day survey of Solan Bank Reef Site of Community Importance aboard the MRV Scotia.  Solan Bank Reef is one of the 20 offshore candidate Special Areas of Conservation in UK offshore waters and is located approximately 50km north of Cape Wrath in the north-west of Scotland (see map below). 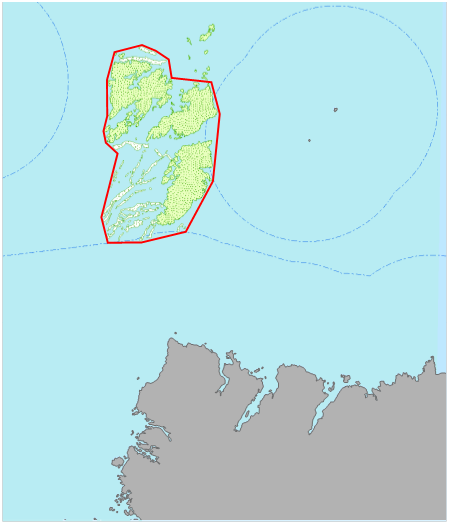 Map displaying the cSAC boundary and reef feature.
View and download spatial data for this MPA on the JNCC UK MPA interactive map.

The site is designated for Annex I reef, specifically sub-types ‘bedrock’ and ‘stony’ reef. Bedrock outcrops create areas of high topography with linear features, thought to be bedrock joint planes, forming cliffs up to 10m. In areas of bedrock where linear features are not as prominent, bedrock outcrops are smooth and undulating forming features known as roches moutonnées. The reefs are characterised by encrusting fauna, mainly bryozoans and in the shallower areas, encrusting coralline algae. Also present are cup corals, brittlestars, a range of sponges, bryozoans, hydroids, soft coral, jewel anemones, foliose red algaes and kelp.

On this cruise, we will focus on gathering seabed evidence to inform the development of a
national indicator of ‘Good Environmental Status’ for sponge and other epifaunal communities (http://jncc.defra.gov.uk/page-6817) as part of the UK’s obligations under the Marine Strategy Framework Directive (MSFD). The indicator analyses the number of sponges present and their morphologies (body shapes) to assess the state of the seabed communities.

As the indicator was developed for SCUBA diver surveys, the survey hopes to determine whether this indicator can be adapted for use in deeper waters. The survey team will be using a drop down camera system to collect high definition seabed imagery in order to assess changes in sponge communities in response to natural variables and human-induced pressures.

Data on environmental parameters which could contribute to sponge community structure (e.g. turbidity, temperature, current flow and direction) will be collected, and imagery data collected will also help improve our understanding of the distribution and extent of Annex I reef in the site and the biological communities associated with them.