Swallow Sand reveals its muddier side

Our second destination was Swallow Sand Marine Conservation Zone (MCZ) in the northern North Sea. Our objective here was to determine the area of mud habitat occurring on the sea bed, in a site that is otherwise dominated by sand (as the name suggests!) and coarser sediments such as gravels. We arrived on Sunday afternoon and after setting about taking samples of the seabed, we quickly struck mud.

The seabed samples were taken with a heavy device called a ‘mini’ hamon grab, which captures a small (0.1 m-sq) scoop of sediment and brings it back up to the surface. Once on deck we store a small part of this sample for sediment analysis (which will take place in a laboratory) and sieve the remainder to recover any organisms. These specimens will be analysed later to determine the type of biological community that occurs at that point on the seabed.

An unexpectedly good find in one of our grabs was an ocean quahog Arctica islandica. This mollusc is one of several special species in UK waters that the MCZ network is aiming to protect (see pg. 5661 for more information). These are long-lived animals (often living for several centuries if left undisturbed) so if they suffer population reductions they can take a very long time to recover. 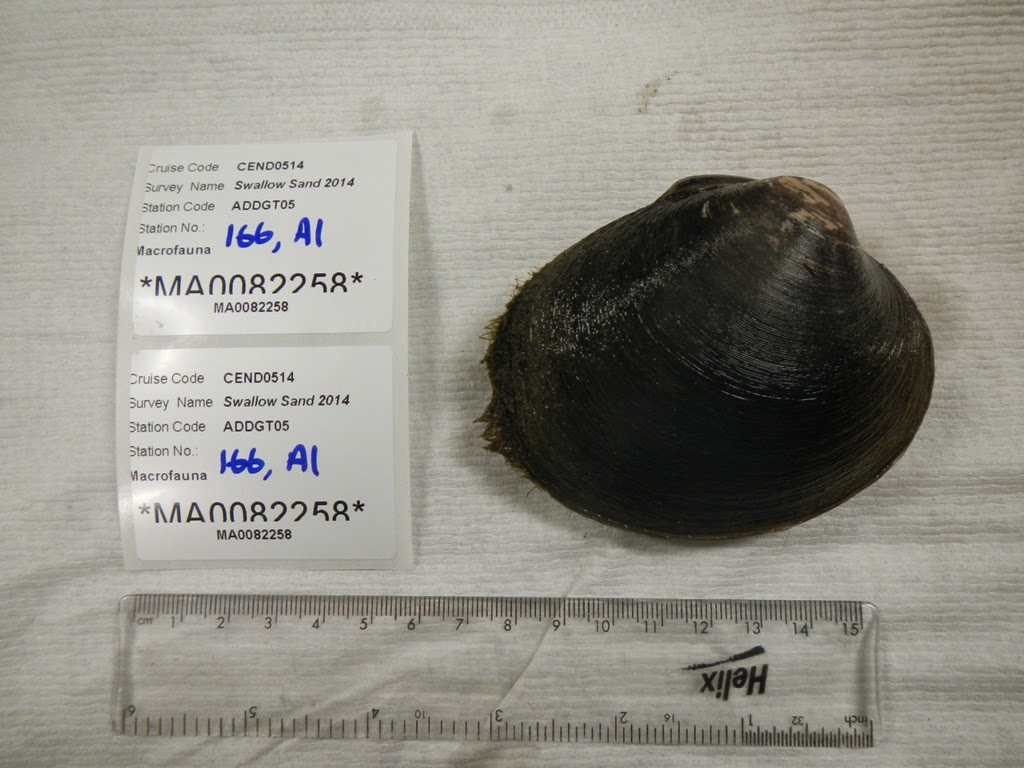 Using our 66 seabed samples we can now get a better understanding of where muddy sediments occur in the north-west of Swallow Sand MCZ. We also deployed a camera sledge at 15 locations for further confirmation and to record the sea life in this habitat. This revealed our first langoustine Nephrops norvegicus of the trip (known to many as scampi), and many Nephrops burrows indicative of this burrowed mud habitat.

Monday 17th was of course St. Patrick’s Day and with several Irish men and women on board there was a celebratory atmosphere. Leading the proceedings was Terry, the ship’s Master and Paul, our Scientist in Charge. A colourful cake the size of Ireland was amongst the festivities and quickly devoured.