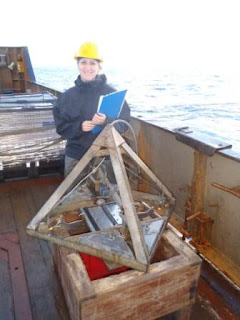 After a couple of days of multibeam to the north of the Stanton Banks site, we got to do some biological sampling. We conducted five video tows and two grab samples from areas of interest detected in the multibeam images. On one camera tow over rocky reef, we observed hundreds of small prawn cracker sponges, Axinella infundibuliformis (see image), encrusting the rocks. On other tows, we saw areas of burrowed mud, with seafans and evidence of Nephrops norvegicus. The two grab samples we collected were both of muddy sediment, which have now been sieved and preserved ready for analysis. It was my first time doing grab sampling, hence the cheesy photo with the Day grab! We use a Day grab to sample finer sediment as it tends to disturb the sediment less during collection. 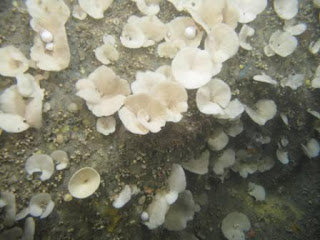