High winds on the high seas

So since last I blogged all has been well except for the bad weather that has been battering the south coast of the UK. We had thought that we had missed the most of the bad weather and that we were far enough up the Channel to not be harried by the high winds. Sadly it wasn't to be and at 23:00 on the 7th of June we had to go down on weather. Having said that the decision to down tools was an easy one due to several good rolls of approximately 30degrees spilling tools and gear off desks and forced a few of the crew to hold onto anything vaguely looking stable. Once we had turned into the weather and took the wind and waves over the bow things settled, for the most part.

Looking out of the window now the sun is out and the seas have calmed, with only a few white horses remaining on the tops of a few waves. All appears back to normal and we are once again back to working our way through the Offshore Brighton sampling locations. With the HamCam stations complete we are now on the hunt for more rocky habitats using the camera sledge before beginning a more intensive multibeam survey at some of the heterogenous locations.

With only 48ish more hours to go we still have plenty to keep us busy before we demobilise in Portland on Tuesday. Here's hoping we aren't subject to anymore weather and can power through to the end unhindered. 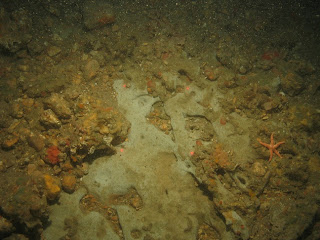